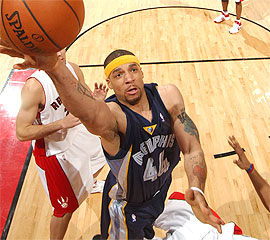 Andre Brown is a 6'9" 245-lb power forward out of DePaul who's made pro stops in the PBL (Philippines), KBL (South Korea), CBA, and D-League, according to his Wikipedia page. This summer, he started all five games for the Golden State Warriors' 2010 NBA Summer League team in Las Vegas, averaging 6.2 points, 7.8 rebounds, and 0.4 blocks per game.

Based on his rather solid performances and with the depth of the Warriors' frontcourt in question (as usual), he should have a legitimate shot at training camp. Here's my 2010 Summer Rotation Players' Rotisserie League -- Rotation-rie League for short -- evaluation of him...

Brown is an imposing physical specimen, very muscular, and with a tattoo on his left arm that reads "BEAST" at the end of an otherwise difficult-to-read-from-afar phrase. At first glance, his build reminds you of 2008 Warrior Summer Leaguer Louis Amundson, who's listed at 6'9" 225.

He's got a decent finesse, feathery touch on the jumpshot. He's got a lot of backspin on the stroke, probably too much. As a result, some of his shots can bounce rather high off back rim. He doesn't look to use the glass that much, either. You would prefer someone down low to have a more rugged style of putting the ball in the hoop.

His shooting form is really a one-handed attempt and that becomes clearly evident when he shoots free throws.

He's so close and yet so far, when it comes to instincts and actually "beasting" on the court. His reaction time can be a little off, his pace up and down the floor not quite fast, then again can't be described as slow.

And while I'd like to see him, like Amundson, rise through the ranks and become a regular contributor on some NBA roster, I'd have to say at this point -- from every aspect of his game -- he is at best a Poor Man's Louis Amundson. Just not quite as quick to ball, a jumpshot not quite as refined, and an ability to finish that's not quite as powerful.

Another glaring issue is that Brown's already 29 years old.

Here's a compendium of my live-tweet scouting notes at Summer League, in which I used the Twitter account @nbalivetweet...

Andre Brown 6'10" 240 3rd yr pro DePaul being a presence at center for the Warriors. Big boy. Athletic. Reminds me of bigger Lou Amundsen.

Heh, ref Deldre Carr just gave a delay of game on Andre Brown for not having his jersey tucked in when subbing in.

You know what, Andre Brown has a legitimate shot at making the Warriors roster.

Andre Brown has a phrase ending with big letters BEAST as a tattoo on his left shoulder.

I'm not sure Andre Brown's in shape. Always bending down holding knees after long stretches. However, maybe ok for a rotation player.

Andre Brown has a horrible FT shooting stroke. Bricked both.

With the big Pistons lineup, Andre Brown holding his own. I count 3 def rebs so far, less than 4 mins in.

Nice offensive reb Andre Brown. This is a great test for him: vs Greg Monroe or DaJuan Summers.

RT @camronsmith: Andre Brown from a lanky unorthodox kid into a McDonald's All American. Also had a short stint in NBA w/the SuperSonics.

Andre Brown has 11 reb for the Warriors thru 3 qtrs.

Andre Brown doin' work altho against the unreliable JaVale McGee, o-reb but got swatted by Trevor Booker who I like.

Hopefully i'll get a chance to analyze Andre Brown vs Gani Lawal.

Andre Brown didn't expect the ball there on a L baseline dribble drive by Reggie Williams. Wake up, Andre. Hands up.

Gani Lawal scores an and-one vs Andre Brown going glass again, up and under. Brown didn't move his feet as Lawal dragged R and underneath.

Good off reb by Andre Brown but he tried to finesse the putback too much. Doesn't seem to use the glass much.

Andre Brown posted up Earl Clark L base, spun, high-spinning J no good, got rebound, foul by Clark on putback. His FT stroke is 1-handed.

Andre Brown has been out. I will now analyze Earl Clark.

Andre Brown gets free underneath, assist Will Blalock, as Earl Clark leaves him to semi-double the other block.

Good D by Andre Brown on Gani Lawal's fade. Hand was in his face.

Andre Brown misses another bunny off back iron but then again if he were making those, he'd be signed. He's so close!

Not bad show by Andre Brown with Scottie Reynolds running the pick&roll with 0:14 left. Scottie turned it over bad cross pass.

Andre Brown just swatted Earl Clark but not the best approach by Clark there. I'm less and less impressed by Clark.