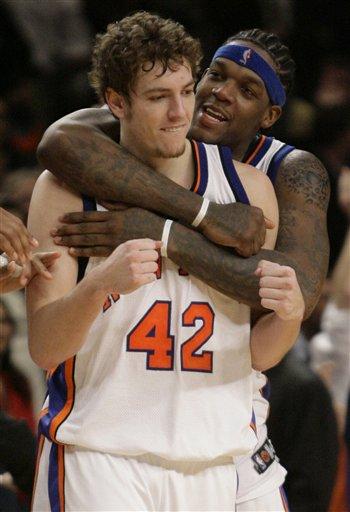 What if David Lee got to play with non-fat Curry?

JUMP for another July rumor!

When [Amare] Stoudemire becomes official, it would end the five-year era of David Lee, but set up a possibility of a sign-and-trade to add another piece. There's been rumors of a three-way trade talk between Golden State, Minnesota and the Knicks where [David] Lee winds up with the Timberwolves, Monta Ellis comes to the Knicks and Al Jefferson goes to Golden State. Lee visited Minnesota yesterday and it has only $7 million in cap room, meaning he'd want a sign-and-trade.

This would be a great time to cut out the middle man, meaning the T-Wolves. Monta Ellis for David Lee (with some pieces to make the numbers work) would be a STEAL. The injury-prone, turnover-prone, tantrum-prone, low IQ-prone, selfish-prone Moped Ellis for a 20-12 big man with over 3.5 assists per game?

Actually come to think of it, why are the Knicks so willing to give up Lee? This guy is a stud. Sure he's not exactly an all-world defender, but he's a fantastic rebounder and a very nice scorer and passer. Show this man the money!

Sending out Al Jefferson for Monta Ellis is an interesting topic for discussion. The deal can be done straight up because the two players' contracts are so similar. For the Warriors it's not quite the no-brainer as Ellis for Lee. Both Ellis and Jefferson have had some injuries over the years and both seem to put up some empty scoring numbers and neither have set the world on fire with their defense. Nothing cracks me up more than two bad teams swapping players- it's basically just changing the way the two teams lose. The Warriors would pick up some much needed help on the glass with Jefferson, but losing Monta would dramatically hurt their game speed and tempo-- but I guess that just means their losses will seem seem slower? In terms of contracts, Jefferson's is one year shorter than Ellis' which goes until 2014 (player option).

I've said it before and I'll say it again. The player who really piques my interest on the Minny roster is Kevin Love. This guy might be one of the most underrated players in the league. I'd LOVE to see this man get more playing time on the Warriors.

Monta Ellis rumors from the past:
99% of rumors never happen, but 99% of them are fun to talk about!