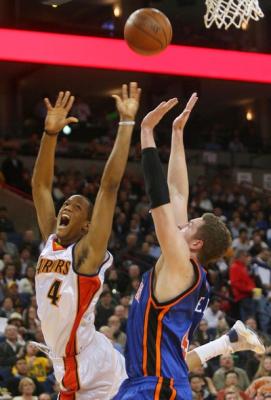 The Warriors are close to a sign-and-trade with the New York Knicks for their All-Star power forward David Lee, according to multiple sources.
The Warriors would send forward Anthony Randolph - not guard Monta Ellis as previously rumored - along with a few other pieces to New York...
If James announces he's decided to play anywhere but New York, the Warriors are in play for Lee. The Warriors are one of a few teams in the mix for Lee via a sign-and-trade with the Knicks. And the Warriors have an offer the Knicks favor, a team source said.
Randolph could be joined by center Ronny Turiaf or swingman Kelenna Azubuike, and an expiring contract such as forward Vladimir Radmanovic.

Normally I would go on and on about the pro's and con's of this rumored move, but guess what? It ain't happening if the condition is LeBron James not going to the New York Knicks.

LeBron is going to be a New York Knick tomorrow at 6pm PST.

No doubt about it.

There's a reason LeBron will be making his announcement from Allan Houston's crib [Posting and Toasting]. Okay that's just a rumor, but do you really think LeBron would schedule an hour of ESPN primetime to announce that he's going to return to the Cleveland Cavaliers? Good luck filling an hour of that snoozefest. Do you really think LeBron would have a grand show like that and upstage his buddies on the Miami Heat Dwyane Wade and Chris Bosh a day after they signed up for the South Beach diet? Same thing for Carlos Boozer and the Bulls. 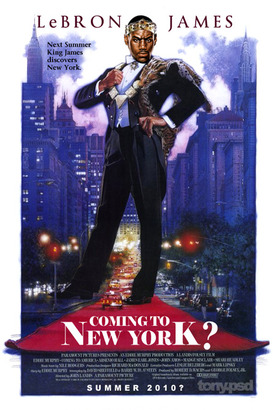 I will say though that if the Knicks and Warriors still make a sign-and-trade of this sort, I'm all for it. David Lee is a very good NBA player. It's anyone's guess how good Randolph will be. He has a long, long, long way to go before he's even as good as Lee is right now.