Questions Abound: Stephen Curry, Jeremy Lin and the State of the Point Guard Position for the Golden State Warriors

Share All sharing options for: Questions Abound: Stephen Curry, Jeremy Lin and the State of the Point Guard Position for the Golden State Warriors 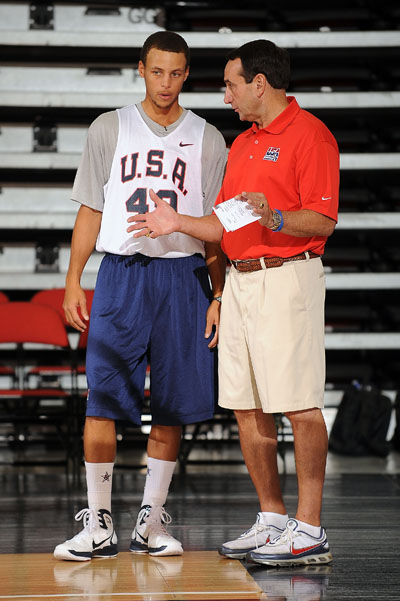 Listen up Steph! Get your learnin' on with team USA!

There has been a lot of talk recently about what we should expect from our Warriors in the upcoming season. We've seen predictions ranging from 50+ losses to 50+ wins. Some of the more moderate estimates like those in onlxn's excellent FanPost and on his blog put them closer to a .500 team... if we are lucky. Those are some pretty big swings. I guess that shouldn't be much of a surprise, because as I've been thinking about this I can't remember heading into a season where this team had so many unanswered questions. From ownership, to management, to the coaching staff, to possible personnel moves, nothing is really settled at the moment. Even setting all that aside, there are still plenty of questions about what we should expect from the players we actually have on the roster. So that's what I'm going to try to take a look at for now, until the sale goes through and all the other pieces fall into place. I'll be going through position by position to highlight some of the storylines that I'm personally looking forward to following and questions that I can't wait to have answers to. Without further ado, let's start with the point guard position. 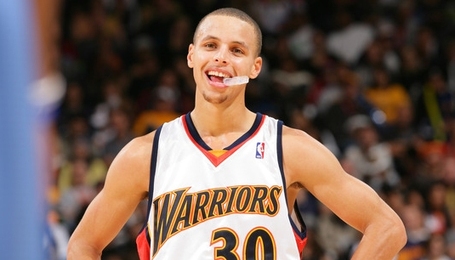 He busted through the 'Rookie Wall' what will he do to the 'Sophomore Slump'?

We all had the pleasure of watching Curry blossom over the course of last season. He just kept getting better and better seeing his minutes, scoring, and assists rise steadily as the months went on. In fact from February on, when many rookies see a dip in their production (I'm looking at you Brandon Jennings) when the grind of the NBA season starts to take its toll, Steph started putting up lines like 21.5 Pts 5.3 Reb 7.3 Ast (Feb) 19.8 Pts 4.3 Reb 7.3 Ast (March) and 26.4 Pts 6.4 Reb 8.1 Ast (April). He was nothing short of stellar.

So this begs the question "What should we expect out of Steph Curry?" Was the end of last year a fluke? Can we count on the kind of numbers he was putting up in the closing months of the season? Will he (gasp!?!?) be even better?

Well, yes, there are still a few of us Warrior fans who choose to at least be cautiously optimistic instead of head-over-heels, already-getting-a-Steph-Curry-Hall-of-Fame-tattoo optimistic. Point is, pretty much all of the Warrior Nation (is there a Warrior Nation or did I just make that up?) is very excited about this kid. I haven't done an official survey (hey, maybe I should), but judging by the comments I see on this site, I think that most Warriors fans are at least expecting him to put up the kind of numbers he did at the end of last year, and many of you are expecting to see significant improvement. What I haven't seen is many folks preaching caution or predicting a step back in his progression. I'm not saying there is any particular reason to expect a slump (although I still have some concern about his ability to run the point at a high level) but can you imagine how devastated Warriors fans will be if he doesn't pick up where he left off? It's not like it hasn't happened before. It wasn't long ago that we were getting our hopes up about late season performances from the likes of Anthony Randolph and - going back a bit further - Mike Dunleavy (I know, it's sad) only to be disappointed the following year.

Well, that wasn't very fun. Can we go back to comparing him to Steve Nash? Please? 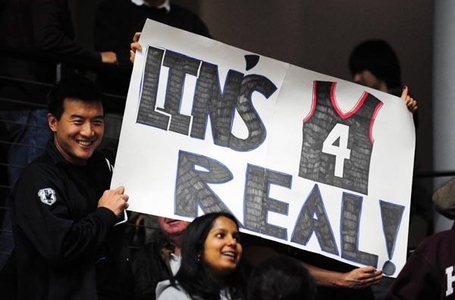 Don't get me wrong. I like Jeremy Lin. I work in Palo Alto, and I can't help but get sucked into the hype about the local kid making it in the pros with his favorite team. I also totally get why he is already a source of pride for many Asian American Warriors fans. I really want to see this kid succeed. We've also seen some compelling statistical analysis that can only help to bolster our confidence in his chances.

BUT (you knew this was coming, right?) is it really a good idea to expect this kid to contribute 10+ minutes a night at the PG spot? I'm not saying he can't be successful in that role, but with questions about the strength of competition he faced in college, and the concerns about his ability to play PG in the NBA (4.4 apg in his Senior year at Harvard) I think using the term 'unproven' is more than fair. Are we willing to hang our hopes on an impressive Summer League performance against a top pick?

I'm not completely opposed to the idea of Charlie Bell getting spot minutes to lock down an opposing guard when the situation is called for, but given the options Jeremy could very well be thrown in the deep end and forced to sink or swim early on in the season.

Warriors Fans - "This is not the backup point guard you are looking for."

Warriors Management - "This is not the backup point guard we are looking for. Move along."

The good news is that Warriors management recognized that backup point guard was a weak spot on our roster so they decided to re-sign CJ Watson... oh, wait... what? They let him walk? Oh... Well, the good news is they went out and signed a solid replacement in JANNERO PARGO?!?! YUCK! Oh, wait... Huh? So they didn't actually sign him? So what happened? Was it a premature announcement from an over exuberant agent? Was it reaction to the immediate negative response from sites like this one? Or, was it an 11th hour phone call from Joe Lacob that put an end to Pargo's tenure here before it even began? Who cares? I'm more concerned with what the team plans to do now. If they are planning on moving forward with the guard rotation as is, then I'm hoping that they will be quick to respond through a trade or signing if Lin and Bell don't bring the support we need from the bench.