2010-11 Washington Wizards Preview - Can They Co-Exist? :: Around the Association

Share All sharing options for: 2010-11 Washington Wizards Preview - Can They Co-Exist? :: Around the Association 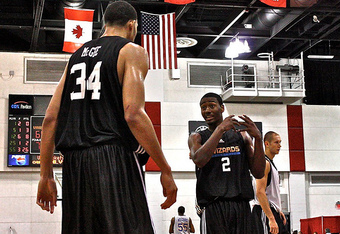 The future of the Washington Wizards: Wookie and Wall.

We get this year's 30-teams-in-30-days NBA preview off to a start in reverse alphabetical order with the Washington Wizards.

Ever since the Warriors traded Chris Webber to the Bullets, and then with Gilbert Arenas and Antawn Jamison, the two franchises have always seemed like alter egos of each other and last season was no exception. Both teams finished 26-56 and this time, it was the Wizards with their star scoring ballhandler who was suspended for a huge amount of games for an off-court transgression.

The Wizards then blew up the roster, got the #1 pick in John Wall, and here we are. As we set forth into 2010-11 and going back to these sister-city comparisons, I'd have to say that I like the Wizards' retooled lineup a lot better than the Warriors'...

In true alter-ego fashion, while the Warriors have traditionally stockpiled guards, this past off-season, the Wizards stockpiled their frontline. The Wizards still only have 12 players signed, but for now they are apparently content going four-deep in the backcourt with Arenas, Wall, Hinrich, and Young. Not bad, actually.

From my Summer League scouting report a few years back, Armstrong was one of the few inside players who likes contact and he's been improving his game little by little each season.

Yi has been regaining confidence in the Worlds at Turkey and Booker held his own down low in the ACC last year, so your biggest question marks are Seraphin and Ndiaye. Seraphin was already on most draft boards and Ndiaye had a solid outing at the all-senior Portsmouth Invitational.

Also, McGee (aka "Big Daddy Wookie") has had a breakout summer sharing the spotlight in Vegas with Wall as the Wizards' Summer League squad trounced the competition, then capping that off pre-Worlds with Team USA before getting cut.

Finally, Ted Leonsis at the helm (again, eerily parallel to the Warriors' ownership handover!). As seen with his ownership of the NHL's Washington Capitals, Leonsis doesn't quit and perhaps best of all, has a gentlemanly approach and aura.

When measuring the potential success of a team, the first thing you might look for is that triumvirate, if not Top-5 superstar. With the Wizards, can it be Arenas, Wall, and McGee? McGee's probably not there yet, but the bigger question mark -- assuming there are no health concerns -- for now might be how Arenas and Wall can co-exist in the backcourt. [Insert Warriors parallel here.]

IMHO, I think they can. You look at how Gil used to play pre-injury (thanks to last year's Wizards preview by AB1) and you see that when his outside shot is working, he's nearly unstoppable. Sure, he had the ball in his hands a lot in that 60-point explosion against the Lakers, but don't forget a good amount of his points come from deep treys.

I can still envision Wall breaking down a defense on one side of the court to find Arenas open on the other side. It may not be 60 points whereby every possession is initiated with the ball in Gil's hands, but I can see Wall with plenty of assists to an Arenas in shooting guard mode. And frankly, that's better basketball than Gil on-fire with Butler and Jamison filling in on the non-Arenas possessions.

Last year it was the tension with Caron Butler as Arenas would yield the ball to him and not see it back, and before you knew it, the season was over with the gun suspension. As demonstrated with Butler, I don't think Gil necessarily needs the ball in his hands, and perhaps John Wall is the best thing that could happen to him at this point in his career.

And if the Wizards' deep frontline meshes well, look for a possible trade amongst such quality assets that could bring a 3rd player to complete the necessary triumvirate, unless of course McGee suddenly becomes a household name.