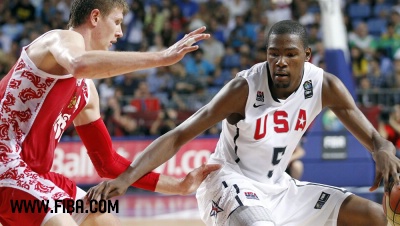 This is Kevin Durant, Team USA's workhorse against Russia. 33 pts, played 37 of the 40 mins.

There was no Easy Button against Russia. They gave Team USA quite a good challenge. Russia started out executing their offense well, making the extra pass and finding open guys who moved around a lot. They also had a large guy in the paint grabbing or tipping rebounds. It didn't help that Team USA started by gambling for steals and missing, resulting in 5-on-4 plays. It was a nail biter all the way to halftime. Russia took a 5 pt lead halfway through the 2nd, but a little cold shooting from Russia gave us a nervous 5 pt lead at the half.

Team USA must have done something different defensively in the 2nd half, because Russia's offense slowed down, and they also kept missing shots. My guess was that Team USA stopped gambling for steals on defense, they rotated to bring help and cut off the extra pass plays, they glued to their man tightly to prevent the easy entry pass to start a play, and they hung around the paint to fight for rebounds. By the end of the 3rd, USA led by 14 and Russia looked worn down. Team USA did show a little lull here and there in the 4th, but Coach K used timeouts to remind them to keep playing, and they hung on to win by 10, 89-79.

Our next opponent, the Utah Jazz, er, Lithuania. Familiar players on Lithuania: Linas Kleiza. Sarunas Jasikevicius would have been a familiar name to us Warriors fans, but he's not playing in this tournament. He's was a great bench cheerleader during our playoff run. He was praised as "the great Sarunas Jasikevicius" by the announcer in the Lithuania/Argentina game, and also in various online articles.

Make the jump for some more reading on what I saw in the Lithuania/Argentina game.

TV note: Serbia vs Turkey will air on ESPN Classic, espn3.com at 11:30am PDT, following our game vs Lithuania. We'll play the winner/loser of Serbia/Turkey, so it will be a good game to watch and scout our final opponent.

All Lithuanian eyes were targeted on Luis Scola.

Luis Scola made headlines in the Round of 16 when he scored 37 and carried Argentina past Brazil 93-89. Everyone took notice... including Lithuania. They came out with the game plan of shutting down Scola, and it worked beautifully. Lithuania harassed Scola, pushed him, shoved him, elbowed him wherever he went. They made it hard for Argentina to pass the ball to him. When Scola did have the ball and tried to make a move, the double team came by to stop his move. Scola was completely trapped, frustrated, ineffective, and could not hit his shots. It reminded me of how Nellie trapped and harassed Dirk Nowitzki.

It wasn't just the defense on Scola. The rest of Lithuania's defense suffocated Argentina's offense most of the game. Shooters had a hard time shooting, drivers got stuffed. Lithuania added to the attack by shooting lights out from the outside. At one point in the 2nd qtr, Argentina was 0/9 from 3pt, while Lithuania was 6/6. Each 3pt make was a dagger against Argentina's chances at winning the game. 7/7, then 8/8 to lead by 16. The "cherry on top" to Lithuania's attack was a last second tip-in at the halftime buzzer that counted to give Lithuania a 20 pt lead at the half. And the daggers kept coming after the halftime break. Lithuania "Anthony Morrowed" Argentina with more 3pt makes in the 3rd, totaling 11/14 for the game at that point. They pushed the lead to 32 by the end of the 3rd qtr, and that's pretty much all that mattered. 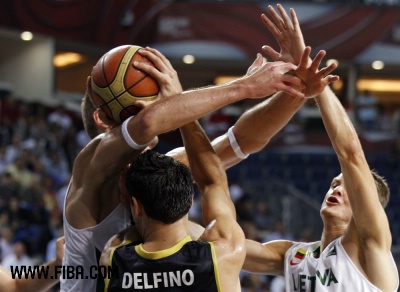 So what can we expect from Lithuania? There's a reason why I called them the Utah Jazz. Lithuania is physical, they will hack, they will push, they will clog the paint, and they will defend hard. We saw that during the exhibition game in Spain last month. We beat them last time by using strong perimeter defense from our guards, which slowed down their play execution and allowed our help defense to recover and break up their offense. I assume Lithuania will prepare for that this time.

Meanwhile, Lithuania could also try the same trap strategy against Kevin Durant, especially after he scored 33 pts against Russia. But Durant has a more expanded offense than Scola. For example, Durant can shoot the 3. So trapping him at the perimeter might not work as well, because you open up lanes for other people to drive in. Also, we have other weapons to go to, such as Chauncey Billups's 3pt shooting and Rose's athletic drives.

Finally, I do not expect Coach K to play Stephen Curry much, if at all, in this game. Curry is a skinny little twig amongst tall strong trees. Whatever shooting he might bring, which hasn't been much, will not offset his lack of strength and speed, especially since we've already seen just how much Curry and screens don't mix.