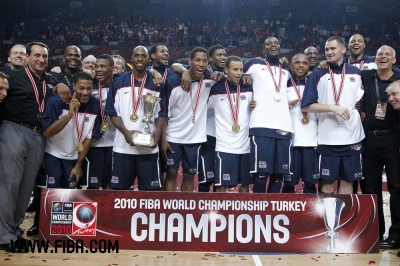 The "B Team" got it done in Turkey.

It's been 16 years since Don Nelson and the Dream Team II took home the FIBA gold, but Team USA finally did it. Coach K led a bunch of young and inexperienced players into Turkey and they proved that "The B Team" was really "The Gold Medal Team". In doing so, Coack K became the first US coach to win gold in both FIBA and the Olympics. Make the jump for a wrapup of this game, and a few post game pics. 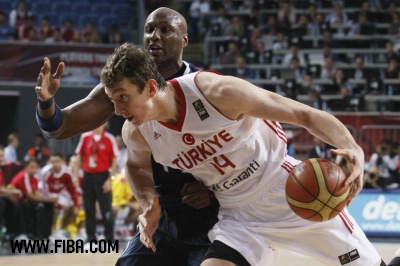 It would be easy to say that we won because of Kevin Durant's performance, but the biggest reason why we won was because of our defense throughout the game. Outside of Kevin Durant, most of our other players were pretty cold offensively, but the defense kept Turkey from taking advantage. Some highlights: Eric Gordon harrassing a Turkey guard all around the perimeter. Lamar Odom quietly defending the paint, keeping post up players from taking easy short shots. Multiple players collapsing into the paint to try to block Turkey players at the rim. Team USA, anticipating a Turkey steal, quickly gets back on defense and prevents the Turkey fast break. A Team USA guard rushing out to threaten a passing lane, forcing the Turkey guard to go to a different option. Multiple Turkey 24 second violations. 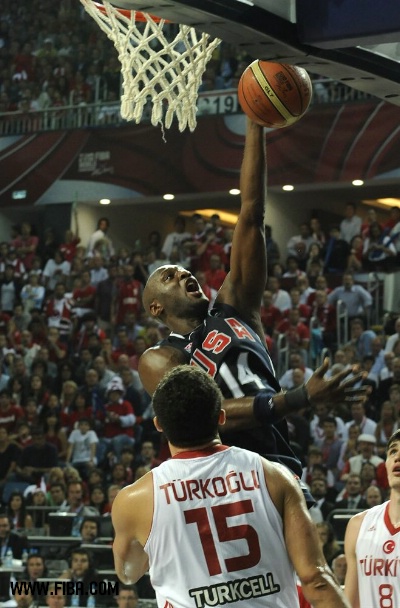 Odom was a quiet monster in the paint.

Speaking of Lamar Odom, he deserves a separate paragraph for the "dirty work" he did around the paint in these games. He kept out low post players, he blocked or changed short shots, he fought to grab or tip rebounds and clean up misses, and he made some nice outlet passes after getting the rebound to fuel Team USA's fast break attacks. 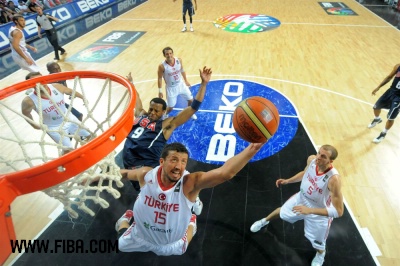 Hedo Turkoglu started out well, then hurt his knee.

A contributing factor to Team USA's win: Hedo Turkoglu's knee injury near the end of the 1st qtr. The announcers said he was in some sort of brace, and that limited his minutes and likely his effectiveness too. I still don't think Turkey would have beaten us, but it could have countered Durant's performance and made the game closer. 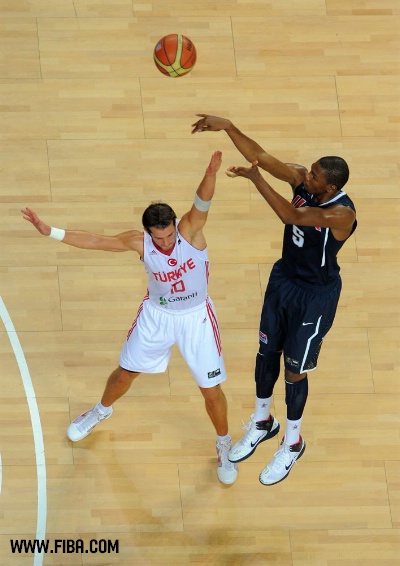 For the 3rd game in a row, Kevin Durant caused nightmares for the opposing coach.

Finally, to save the "funnest" for last, Kevin Durant's performance must have caused some facepalms on the Turkey side, particularly his 3pt shooting. He hit 3/4 3pts alone in the 1st qtr and 2 more in the 2nd to total 5/9 at the half with 20 pts. After hitting 2 consecutive 3s to start the 3rd, Turkey really turned up the defense on Durant. They glued a man on him, they pushed him and shoved him around. Durant would only score 2 more pts when he got switched onto a smaller Turkey defender, and Durant took a turnaround shot over him. Scoring by qtr: 11, 9, 8, 0.

Defense and fast breaks held Turkey at bay in the final qtr.

Shutting down Kevin Durant for the rest of the game didn't help Turkey much because of the aforementioned Team USA defense, which kept Turkey from scoring easily and quickly, forcing Turkey to eat up clock and prevent any sort of miracle 4th qtr comeback. At the same time, that defense started several fast break scores in the 4th, quickly countering whatever pts Turkey managed to score. That made up for the absence of Durant's offense to close the game.

All that hard work finally paid off, as Team USA proudly holds up their gold medals and the FIBA trophy. Here are some post game photos. 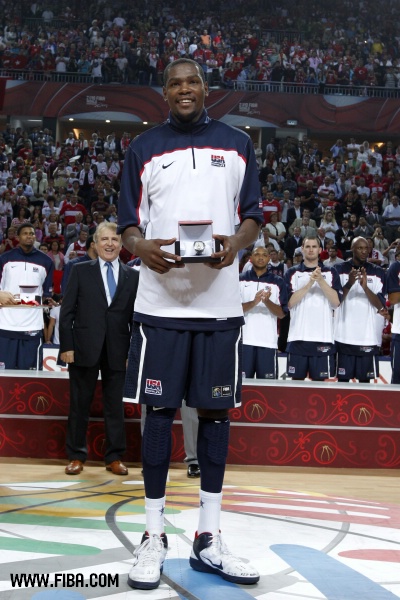 It was no surprise that Kevin Durant is the FIBA 2010 MVP. 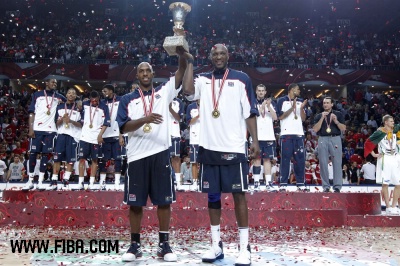 Chauncey Billups and Lamar Odom held the trophy first, then brought it to their teammates where everyone got to touch it.

Stephen Curry holding the gold medal and the trophy in the locker room. (Click for full image.) 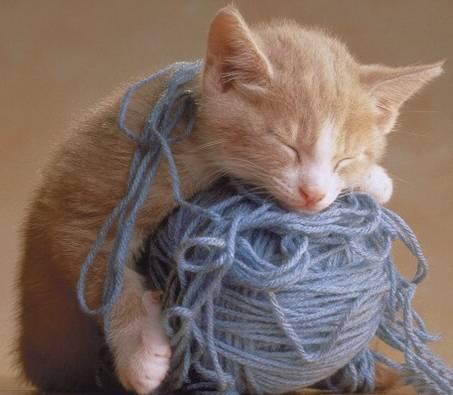 Stephen Curry, get some rest. We don't want you to show up to training camp like this.

So what's next? With the FIBA 2010 tournament over, the next basketball action will be training camp in about 2-3 weeks. Last year, training camp kicked off with media session day, and we got to see live online streams of Jim Barnett and Tim Roye interviewing players. We'll soon see if they do the same thing this year.

So get plenty of rest, Curry. We'll need you for upcoming season.

That concludes my coverage of the FIBA 2010 tournament. Hope you enjoyed reading what I wrote.