Warriors to Sign Louis Amundson: You Asked, They Listened? :: Finally Some Depth Up Front for Golden State

Share All sharing options for: Warriors to Sign Louis Amundson: You Asked, They Listened? :: Finally Some Depth Up Front for Golden State 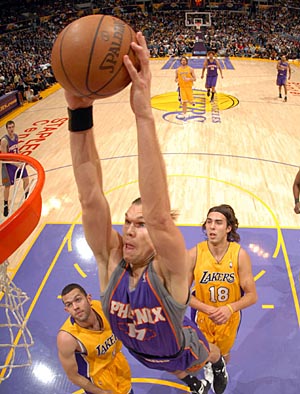 Marc Spears via Twitter - Thanks to sokuj00 for posting the FanShot!!

Warriors fans have been begging for more depth up front ever since the news broke about Udoh's injury, and at the top of most people's wish-list was Louis Amundson. He's been on the Warrior's radar ever since he played on the team's Summer League squad a couple years back. He played pretty well back then too, so well that he landed a spot with the Suns. Playing for the Suns the last two seasons he's shown that he can be a valuable asset coming off the bench in this league. He's a scrappy player that rebounds the ball well, and can protect the rim. His offense isn't anything to write home about, but it looks like he's learned to pick his spots and not waste offensive possessions. Overall, I think it's a great signing that should make a difference, especially early in the season while Udoh is healing up. Jump for some details from Matt Steinmetz over at CSNBayArea.

But what signing Amundson does for the Warriors is change the balance of their roster – and that was something that was drastically needed.

The Warriors badly needed another big man, and Amundson was the best one remaining at this point of the offseason. He was a valuable energy player for last year’s Phoenix Suns, and there’s no reason he shouldn’t be able to provide the same kind of role for the Warriors in 2010-11.

Amundson will sign a two-year contract worth approximately $4.8 million today, with the second year a player option.

Amundson will be paid $2.25 million in his first year, which was all the Warriors had remaining of their mid-level exception.

Read more: Addition of Amundson Fills a Big Void for W's
Tune to SportsNet Central at 6, 10:30 and midnight on Comcast SportsNet Bay Area for more on this story

EDIT: Thanks to Lat We N Trash for his FanPost linking to this ESPN article by Marc Stein

Power forward Louis Amundson, arguably the NBA's top remaining unsigned free agent with just two weeks left before training camps open, has agreed to a new deal with the Golden State Warriors, according to his representative.