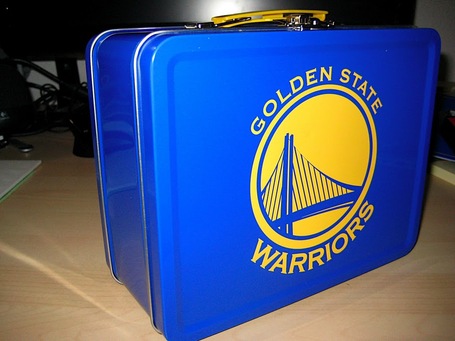 When I got home today, I opened up a package from FedEx and was happy to see a package from the Warriors. Inside was a present for the 8 year old version of me - a lunchbox. Yep, a Warriors lunchbox. How lame. At least it's better than the broken locker we got 2 years ago, but doesn't quite top the backpack from last year. To make it even worse, inside the lunchbox, was a juicebox, crackers, a fruit roll-up, some candy and what the...? No sandwich? 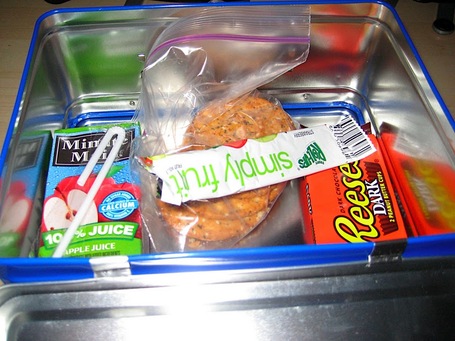 What are we to make of this lunchbox? Is there some deeper underlying meaning? What are the Warriors trying to tell us?! I must know! Hit the jump for some theories. 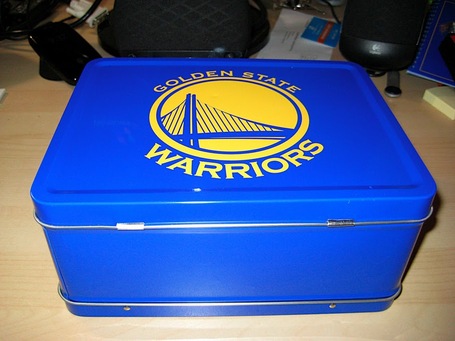 1) Cohan's Last Shot
This may have been Cohan's last parting and subtle shot at us fans. We booed him, complained about him, and nearly paraded in the streets when he sold the franchise. That has to be a little insulting. Instead of calling each and every one of us fans to insult us (Yo mama is sooooo fat, when she went to the beach Greenpeace tried to drag her back in the water.), he sent us a kid's item. He's trying to tell us that we're all little kids and don't deserve anything better than a lunchbox that our mommy and daddy can pack our lunch in for our ride to school on the big, yellow bus. Yup this is a lunchbox for little kids. Kids who don't know better.

Or my second but not quite as good theory...

2) Lacob and Guber's New Franchise Mentality
This could also be Joe Lacob and Peter Guber symbolically telling us fans that it's a new franchise. One that brings their lunch to work everyday, does the dirty work, and just gets the job done. All we needed was a hard hat and some tools to complete the symbolism, but that might have been too expensive to mail. They're trying to tell us they're bringing a new mentality to this franchise.

Or my last, most realistic theory...

3) Warriors Drunk Marketing
Some people drunk-text. Others drunk-dial. The Warriors marketing team drunk-brainstormed. While plastered, someone thought it would be hilarious to send a lunchbox as a season ticket holder gift, convinced their manager, and got the sign off on the promotion. Off goes the order for thousands of lunchboxes with the Warriors logo and here we are. Lunchbox. Warriors logo. Warriors marketing team, a great time out. Bring your lunchbox to the game, get a special prize. 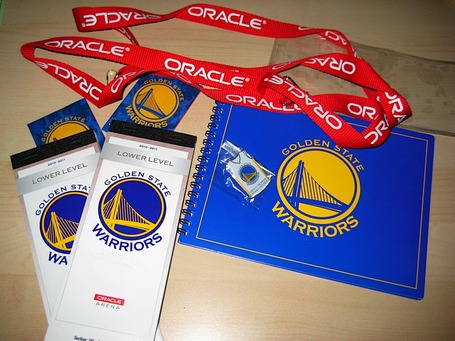 After pondering these inane thoughts, I dug a little further in the FedEx package and right underneath the lunchbox, were the season tickets and the rest of the package contents. Phew. Here's what I found:

The contents of the package are pretty much the same exact stuff that RayAlmeda got in his (thanks for the fanshot!), except we didn't get the Jawbone Bluetooth headset. I think we got gypped. I'll have to call our Warriors account rep tomorrow and throw a hissy fit. This is unacceptable. Ours better come with the new logo on it.

We'll survive without the headset. Other than that, I'm getting even more excited about the season! Season tickets are in hand, I'm ready to go to the Oracle to watch the Big 3 - Curry, Lee, Monta. I guess we'll have to work on our "Big 3" - it's not quite Wade-LeBron-Bosh. 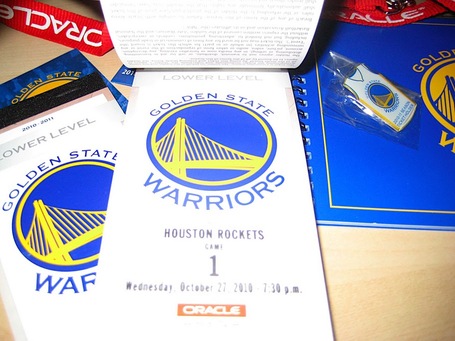