- Jerry Sichting on conditioning and being in shape and the defensive mindset.
UStream Video Link: Ast. coach Jerry Sichting interview after morning practice

gswscribe: @JLin7 has some kind of brace on his right shoulder. Doesn't seen to be limiting him though

gswscribe: By the way, @JLin7 has what's called "shoulder laxity" or looseness in the shoulder joint. He said he wears the brace as a precaution

- Who will back up Curry? If Smart wants to reduce Monta's minutes, then Monta can't back Curry up for the entire season. MT2 looks at the options.
Marcus Thompson II: Warriors Looking Within for Back-up PG

- A photo gallery of portraits of the players: Media Day Player Portraits 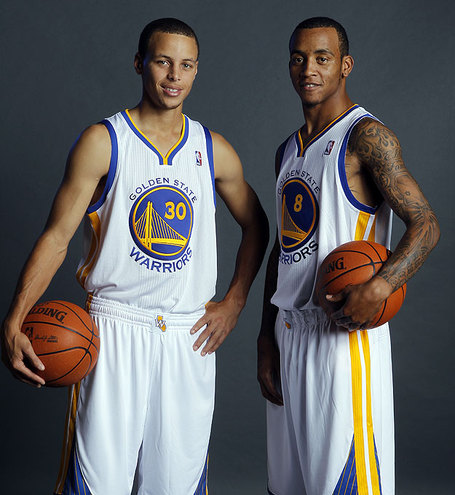 Stephen Curry and Monta Ellis cheesing it for a duo portrait. Click for full size.

- Jeremy Lin is wearing a shoulder brace as a precaution because of looseness in his shoulder joint.
- Monta vowed he will NOT play 48 min of a game this season.
- Riley wants to get an evaluation of the team by January to see how many moves are needed to make the playoffs. He vows this team will make the playoffs within the next few years.
- The collective bargaining agreement says that if there are 2 practices in a day, 1 of them must be a non-contact practice.
- Curry said the biggest thing he learned from FIBA was on-the-ball defense.