Share All sharing options for: Game Thread: FIBA 2010 Round of 16 - Team USA vs Angola 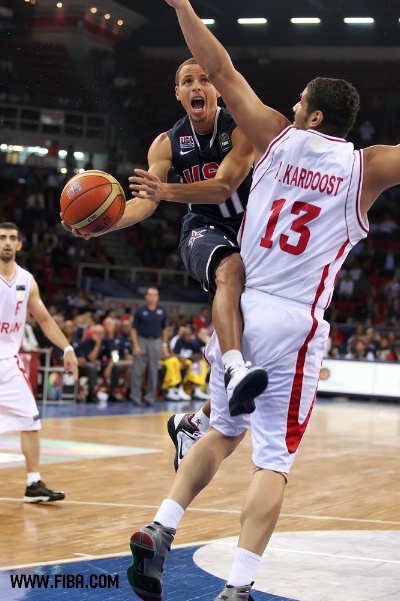 You're about to face the pressures of playoff basketball. Live it up and get tough, kid.

We now enter the Knockout Round. Team USA must win 4 games in a row in order to win the FIBA gold in a 1-and-done format. That means no more complaining to the refs, no more showcase passes, no more high risk NBA Jam style dunks, no more sloppy plays. Chauncey Billups compared the last two games to an NBA team "taking it easy" on the final regular season games before the playoffs. For the sake of Team USA pride, I hope he's right.

One positive about the FIBA tournament structure is that if you're really hungry for basketball action, once Team USA passes the "Round of 16", they are guaranteed to play 3 more games. That's because in FIBA, they play a "loser bracket" to determine the rankings for #3-#8, though I'm not sure why. Perhaps that's because FIBA awards a total of 8 medals at the end of the tournament: gold, silver, bronze, steel, plastic, wood, paper, and twinkie. The twinkie medal is awesome because it lets the 8th place players snack on something while they watch 7 better teams receive their medals. OK, perhaps not. My guess is that the top 8 rankings affect eligibility to future tournaments, so that's why there are loser brackets.

Onward to the Round of 16 and Angola, an opponent that I think Team USA should beat. Familiar names on Angola: none.

Update: Our next opponent is Russia. Added broadcast times.