Share All sharing options for: 2010-2011 Philadelphia 76ers Preview: Spoiler Alert! :: Around the Association 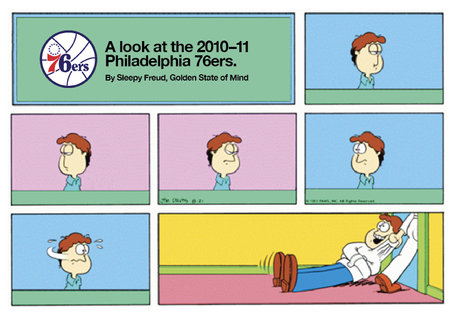 We interrupt your regularly scheduled Sixers 2010-11 preview for an open question: what’s the point?

Not "what’s the point of religiously following the trials and tribulations of a bunch of pituitary cases in shorts chasing after a ball"? We know that the point of that is, like, emotional fulfillment. Or aesthetic thrills. Or distraction from life's real problems. Or force of habit. Or, you know, something.

The more pressing question — the elephant in the NBA's crib at the in the twilight of the summer of LeBron — is, "what’s the point in rooting for a team other than the Miami Heat?" Jump for more pointless musing!

The competing strains of hope v. realism are something all fans of bad or mediocre teams have to grapple with, to one degree or another. But in the NBA, where the truly great players invariably find themselves wearing rings, the somewhat unholy union of two of the 3-4 best basketball players in the world — together with a Top 5 PF and one of the world's best shooters — casts the issue in a rather harsh light.

In football, a team like the (S)aints can put together a couple of smart drafts and bring joie where once there was désespoir. In baseball, the financial imbalance theoretically makes it harder for loserly, small market teams to compete; but even a team as hopeless as the Pirates, who have done basically zip since Willie Stargell and Kent Tekulve were boogie-ing down to Sister Sledge, can look to small market teams like the '03 Marlins or today's Rays for rays of inspiration. Baseball, by its nature, gives no guarantees, of wins or losses. Heck, even our beloved Giants, who haven’t won it all since they left the Polo Grounds, and look every bit as "cursed" as the Cubs, are one strong closing stretch and three l’il playoff series from doing the unthinkable. (Knocking wood, furiously ... but as Curt Schilling said, "Why not us"?)

Basketball gives something closer to guarantees. Sure, a team other than the Heat has a non-zero chance of winning it all in the next half-decade. But there are degrees of non-zero. For the next 4-5 years, barring serious injuries to James or Wade, any team that isn't the Heat has an excruciatingly tough row to hoe. And any Eastern Conference team that isn't the Heat, Magic, Celtics or Bulls ... well, ugh. As that non-zero chance begins to approach zero, even the most diehard fans, when they're lying awake at night, may ask themselves, "why?"

This existential musing doesn’t really apply to the Sixers more than to any other non-South Beach-based team. I just thought now was as good a time as any to choke down the bitter pill of reality. Plus, Philly fans may taste the bitterness a bit more intensely than most, since they're notoriously batcrap crazy about sports, with a taste for championships. In my lifetime, the Sixers have had one brief dalliance with true greatness (the early '80s Moses/Dr J team, who in '83 went 12-1 in the playoffs, including a 4-0 sweep of Lakeshow in the finals) and a couple with near-greatness (the late '80s Barkley teams, and the defensive/rebounding beasts of 2000/01, who managed a championship cameo despite the inefficient volume-shooting ways of Iverson). In theory, a storied franchise like theirs should be due for another rise. But as long as LeBron, Wade and Bosh are blithely plying their wares in "South Beach," that next rise may need to wait till the 2020s.

Yet ... somehow, Sixers fans, like Warriors fans, will care. At a certain point, all logic and reason must be tossed out the window. In the last line of Annie Hall, Woody Allen (a big basketball fan from whom I stole "pituitary cases" line above), may have perfectly expressed the plight of the fan of the losing sports team:

It was great seeing Annie again and I realized what a terrific person she was and how much fun it was just knowing her and I thought of that old joke, you know, the, this, this guy goes to a psychiatrist and says, 'Doc, uh, my brother's crazy, he thinks he's a chicken,' and uh, the doctor says, 'well why don't you turn him in?' And the guy says, 'I would, but I need the eggs.' Well, I guess that's pretty much now how I feel about relationships. You know, they're totally irrational and crazy and absurd and, but uh, I guess we keep going through it...because...most of us need the eggs.

Replace "relationships" with "Sixers" or "Warriors" or "sports" and well, there you have it. Sixers fans, like Warriors fans (etc.), need the eggs.

Anyway, without further angsting... the 2010/11 Seventy-Sixers preview. A few things to be sanguine about:

• Andre Iguodala. Please don't call him "Iggy" — it drives Philly fans crazy (and it makes GSoM regulars recall one of the site's all-time most irritating posters). I-gu-o-da-la will clearly never be an MJ, but dang if he isn't close to a Pippen. He's currently drawing raves from Coach K for his beastly defense and rebounding for Team USA. He may be the only guy in the league not named LeBron or Wade capable of averaging 18/6/6 with lockdown perimeter D. He had an l'il dip in scoring efficiency last season (.535 TS compared to .559 career), but with Evan Turner and an improving Jrue Holiday to get him the ball where he likes it, I imagine he'll get back to his career norms in this respect. His escalating contract makes him pricy for a kindasorta second banana type (he's due a cool $56M over the next four years), but in an ideal world he should be part of the solution, not the problem. If Stefanski and Co. really think he's not worth the pricetag ... hey, might the Warriors interest you in an undersized but "exciting" shooting guard? Fortunately for Sixers fans, incoming coach Doug Collins has been lavishing Iguodala with praise, which suggests they may be holding onto him. Or, you know, they're just trying to drive up his trade value.

• Evan Turner. Well, yeah, there was that awful showing in Orlando: 9.4 ppg / 33% fg / 5.6 reb / 2.8 ast / 3.4 tov in 27.4 mpg. How sanguine you are on him overall likely comes down to which you think is more predictive, six meaningless summer league games or a full NCAA sophomore season in which he was an unmitigated stud, even while recovering from a broken back. I know where my money is. Brandon Roy still doesn't seem like an unreasonable comparison.

And ... a few things to be angsty about:

• The frontcourt. Lord knows I've ranted enough on this site about the idiocy of drafting for perceived short-term "need," but c'mon: would it have killed Philly to take a flier at #2 on Favors or Cousins? Turner may well be the next Roy, but they already have Roy's near-equal in Iguodala. In the wake of the weird Dalembert/Hawes trade, their stable of big men currently consists of Brand, Hawes, Speights, Battie, and Jason Smith. Nary a rebounder in the bunch; and the only two resembling proven vets (Brand and Battie) have the notable downside of being toast. Throw in Thaddeus Young, a textbook clueless tweener ... and if that isn't the worst frontcourt in the NBA, I'm not sure what is. (If the mods want a conversation topic for this thread: there it is).

• The city of Philadelphia. Sorry, Missing Barry, but I dunno, Philly just depresses me. I know it's supposed to be "great" — Liberty, Spirit of '76, Rocky, Hall and Oates, etc. — but somehow it carries a pervasive feeling of faded glory. Its heyday was a time when people rode horses and it made sense to have two major cities 90 miles from each other. Now, not so much sense. Till NY tumbles into the sea, Philly will likely remain in its imposing shadow. Back before he became the world's worst film director, M. Night Shyamalan captured the bleak feeling of Philly rather poetically in the opening scenes of Sixth Sense.

• The Heat. And if that doesn't make you angsty enough: the Celtics, Magic and Bulls. And the other six or seven Eastern Conference teams that have marginally more talent and/or promise than the Sixers.

And taxes. And death. And ... the Bruce Willis character is a ghost. Whoops, spoiler alert!