2010-11 Orlando Magic Preview - Can Tinkerbell Get Them To Grow Out Of NeverLand? :: Around The Association

Share All sharing options for: 2010-11 Orlando Magic Preview - Can Tinkerbell Get Them To Grow Out Of NeverLand? :: Around The Association

We march onward with our 30-previews-in-30-days marathon here at GSoM, today with the Orlando Magic. What better analogy than Disney's very own Tinkerbell and NeverLand, the place where you don't grow up. In this case, it's GM Otis Smith tinkering with the Magic's surrounding pieces to Dwight Howard, Jameer Nelson, and Rashard Lewis.

Last year the big one was Vince Carter to replace Hedo Turkoglu. Of course, Brandon Bass also came in, but was an under-valued asset by coach Stan Van Gundy.

This year, it's good-bye to Matt Barnes (leaving a great team for a greater team, a hometown team in the Los Angeles Lakers, kudos to Matt), replaced by Chris Duhon and Quentin Richardson. There's also fortifications down low with draft picks Daniel Orton and Stanley Robinson.

Seems like pretty good tinkering, until you remember that it comes down to those seven-game series in late May.

The problem with this lineup is, inherently, nothing. Well, other than losing Turkoglu last season. I'm sure it's been talked about to death, and probably in a self-effacing manner by Magic blogs such as SB Nation's Orlando Pinstriped Post, but Vince Carter isn't exactly the best chemistry fit to come into an established Big Three that is Jameer, Rashard, and Dwight. When you have established your Big Three and you're still asking yourself, Who takes the clutch shots?, you might end up with 4- and 3-point losses at home to open the Eastern Conference Finals.

But let's not forget, this is well-assembled team as-is and of course any Warriors fan would cut off his or her right arm to make it to the conference finals!

So the Orlando lineup on paper is not the issue. It's the lineup in action, under the gun (oops, can I use that cliche these days?!). That's what matters and, quite frankly, what matters in these previews. So let's take a quick overview, one-by-one against the elite teams of the East (yes, I left out the Atlanta Hawks on purpose):

I think Orlando has the advantage due to the overwhelming playoff experience. 'Nuff said. And I'm doing the Bulls preview in a couple weeks, so I'll over-analyze them later, but I just don't think the Bulls beat the Magic in a seven-game series.

So Tinkerbell (Otis Smith) got some reinforcements this time around to counter the front line of Kevin Garnett, Kendrick Perkins and Glen Davis (and Jermaine O`Neal and Shaquille O`Neal), but these "reinforcements" are wet behind the ears: Orton and Robinson. I think they are good gambles by Tinkerbell, nonetheless. You never know with these young inside players. And you still have solid frontline vets.

However, these guys are not enough to match the "wolf pack" that is the Celtics' front line (when healthy). That Celtics front line is intense, wants to win, plays incredible defense, and will never back down. Their intensity is too much for Dwight Howard to handle alone. Gortat and Bass still don't have enough experience yet. They are over-matched in that intangible will-to-win category.

Assuming everyone is healthy, I think the Celtics will continue to have the Magic's number in the playoffs.

At the Big Three spots (I'd say the Heat's is the Huge Three though), the Magic actually matchup not too badly. Rashard Lewis on LeBron James, Vince Carter on Dwyane Wade, and Dwight Howard or Brandon Bass on Chris Bosh.

The other remaining roles, that's what Otis Smith tinkers with. You have the scoring punch of Duhon and Redick. You have Marcin Gortat, Mickael Pietrus (in a nice mano-y-mano vs Mike Miller perhaps), Jason Williams.

With deep playoff experience playing together, this Magic bench outweighs that of the Heat's in Carlos Arroyo, Eddie House, Zydrunas Ilgauskas, and Juwan Howard. So on paper, it looks like the Magic can hang with the Heat. But then again, the amount of double-teaming needed to counter the talent of three superstars may be too much for any team to handle. More on the Heat later (I'm doing their preview too).

If Rashard, VC, and Howard don't get beasted on by Miami's Huge Three, Orlando can probably do some damage against the Heat. And the Heat won't have as much chemistry as Orlando, theoretically. But I'm not saying Orlando can beat the Heat in a seven-game series. Huge is still bigger than Big. 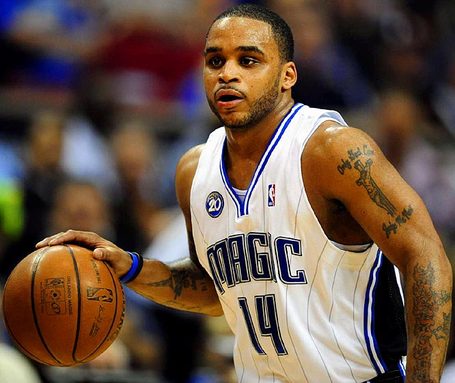 Is Jameer more of an alpha than Dwight? (via www.reclinergm.com)

So it comes down to what seed the Magic gets, and with whom they are matched on the same side of the bracket: the Celtics or the Heat.

But it really comes down to Dwight Howard. If he can make a quantum improvement this season rather than an incremental one, perhaps the rest of the guys won't mentally check out of important playoff games and ruin an otherwise stellar regular season.

He needs to display a hunger and an intensity of a KG to get over the hump, but I'm just not sure his personality will allow for that. After the past few years, I'm starting to feel like Howard needs to be the Robin to another's Batman. For example, he would've been the perfect complement to Kobe Bryant instead of Shaq during the Lakers' "shoulda-woulda-coulda" mini-dynasty.

Unfortunately, no one on this current Magic roster can play the role of Batman and the roster's actually been (mis?)tooled as having Dwight in that alpha dog spot.

In other words, I don't think the Orlando Magic can get over the hump, from the trajectory I've seen thus far with Dwight Howard. But my oh my, how things are relative. Warriors fans would love to have a hump like that!

[Thanks for reading! For more of my basketball-only rants, catch me on Twitter: @poormanscommish]