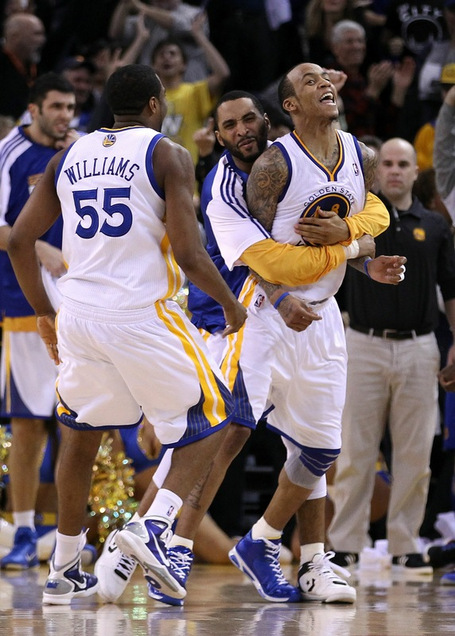 Monta celebrates with Acie and Reggie after hitting the game-winning shot.

It's been nearly an hour after Monta Ellis (36 points, 16-for-28 from the field) crossed Brandon Rush from about 18 feet away and drilled a fading jumper with the clock stopping with 0.6 seconds left in the game, to give the Golden State Warriors an eventual 110-108 win over the Indiana Pacers, and I still don't see any video of Monta's shot anywhere on the national sites.

His heroic game-winning jumper (hit the jump for the highlight from CSN) is nowhere to be seen on NBA.com, ESPN, or Yahoo. I sure hope this does not portend his chances for the coaches' vote of the Western Conference All-Star non-starters.

Anyone know what kind of celebration David Lee was embarking on?

Yet another Warriors game started off with the opponent getting dunks and putback dunks, as (gulp) Josh McRoberts and Tyler Hansbrough started things off with beasty slams. Monta started off by dishing the ball (4 assists by halftime), and Dorell Wright stepped up to the challenge going mano y mano with Danny Granger, with 11 first-half points.

Paul George got an uncontested putback near the Q3 buzzer, but Acie Law got the inbound with 3 seconds left and heaved a 40-footer after crossing halfcourt, and the shot trickled in to put the Warriors down two heading into the 4th. But the Pacers took a 91-83 lead and with about three-fourths of the 4th quarter remaining, Brandan Wright was summoned into the game... (roll the suspenseful music)

I'll let my live-tweets from @nbalivetweet do the rest as we pick things up in the 4th quarter when B-Wright entered...

Granger easily by Vladimir Radmanovich but B.Wright blocks Grangers stop and spin fade. Then Monta backrims a nice drive but B.Wright gets putback.

Dorell had gotten a brief sub but he's back now. But not because he wasn't at table in time. Approaching 4:30.

Wow, just checked the stats and Jeff Foster has 15 rebounds.

D.Lee hits both. Here we go.

Monta draws a charge on the Foster slip. The play that I wrote about in the preview today!

Monta short on the RH layup, D.Lee deflects and B.Wright picks it up, gets fouled. Side out. Monta faces up and scores a swish J from 18'.

Foster called for the over the back. Amazingly Barnett is arguing in Foster's favor, clearly a foul on Foster. D.Lee makes one of two.

Foster slips the high PNR on Dorell to free Granger on the dribble but Granger throws it away!

Collison drives RH after Granger clears out and Curry fouls him for an and-one!

Would be a safe bet if Stephen Curry leads the league in and-one fouls committed. SMH.

OMG what did Barnett have for dinner? He's suggesting a pass back to inbounder for a trey with only 0.6 left. LOL