10 years ago in 2001, the Warriors drafted both Jason Richardson and Gilbert Arenas. They join forces now as savvy vets on the Magic to face their former team - an organization that looks completely different than when the two first entered the league.

But the results are still the same. Losing, losing and more losing.

will all need to have excellent games.Really though, I'm excited about this game for no other reason than to see JRich and Arenas back together. It won't be as fun as when they were on the Warriors, but nonetheless the two bring back nice memories.

Oh the memories, they were so young and innocent then... 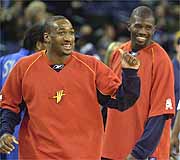 Reunited but not on the Warriors

Now only if Troy Murphy was traded to the Magic, there would be a reunion of the Warriors' 2001 draft class.