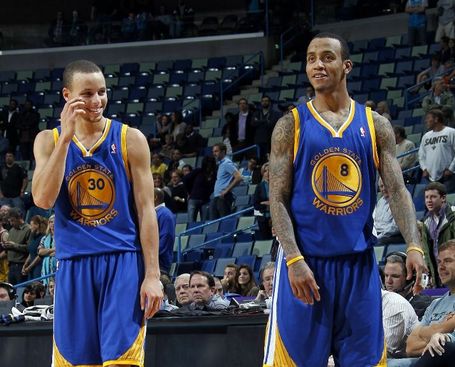 Up and down, down and up, and all around and around. This game was a rollercoaster ride if there ever was one. There were points in the game where it looked like the Warriors would whither away being down by double digits and I was ready to give up. Then there were times where it looked like the Warriors would make a big run and keep the game close. Hornets 10-0 run, Warriors 10-0 run. Back and forth it went for the entire first 3 quarters.

And then the 4th quarter started and of course, this Warriors team who have struggled many times in the 2nd half the past games, came up BIG. Makes sense right?

That 4th quarter? Warriors started it down 10 and won by 7. They won the quarter 38-21! Amazing performance in which they attacked the basket and got a lot of free throws, got Emeka Okafor to foul out, and made some big shots. 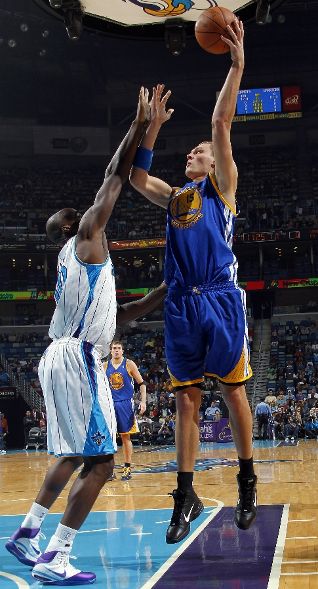 They finally had a fully healthy team.

Andris Biedrins and David Lee were listed as day to day, but both started. It's not so much that they played great games, but it gave the Warriors extra depth. It allowed Keith Smart to mix and match lineups while allowing his energy guys to come in off the bench in the roles they're supposed to be in. He was able to distribute minutes evenly and get production out of each and every one of them. The bench played great and hopefully we can expect that in the future. In the immediate future the Warriors have 18 of the next 22 games at home. If they were ever going to get back to .500, this would be the time.

The Hornets bench? It was not very good. I hope they have a better backup big man other than Jason Smith because if they don't they have no shot in the playoffs where you need a little bit of depth. It seemed like the Warriors were able to stay in the game and make runs with the Hornets' key players resting.

Just some quick thoughts on the Warriors big men:

Andris Biedrins
Apparently he got winded really easily after 21 days off. I didn't quite get that. For someone who's supposed to be in great shape, he should be able to get up and down the floor for more than 3-4 minutes at a time without getting tired. Regardless, it was good to see him back in there and starting. 13 minutes, 4 points and 2 boards.

David Lee
Another injured player returning from injury. He chipped in with 13 points, 2 boards, and 3 assists in 25 minutes. I can't wait for him to get fully healthy so we can see the real David Lee.

Louis Amundson
Need an energy guy? Lou's that guy off the bench. He came in when Biedrins got tired and had a big rebounding game. In 22 minutes he had 12 boards and 7 points. He hustled and worked hard in the paint. This is the kind of energy, production, and most importantly, the role I was hoping to see from him.

Vladimir Radmanovic
He's been skewered on this site and deservedly so. He played 0 minutes in the first half and 17 in the 2nd half. He didn't have a great game but he hit a couple big shots. He inexplicably fouled Chris Paul not once, but twice on the perimeter with less than 35 seconds remaining with the lead.

Ekpe Udoh
Last but not least comes Ekpe. The numbers certainly don't show what kind of impact he had. 18 minutes, 6 points, 2 boards, and 1 block. But I was very impressed with him tonight. He had some big defensive plays and hit a HUGE baby hook over David West with the shot clock winding down and 5:20 remaining in the game. It put the Warriors up 7 in the middle of a 12-0 run in the 4th. He had 4 points in that run. He took a big step tonight as he put in some quality minutes in crunch time. As Keith Smart said in the post-game interview, Ekpe was taken off baby foods and moved to solid food tonight. 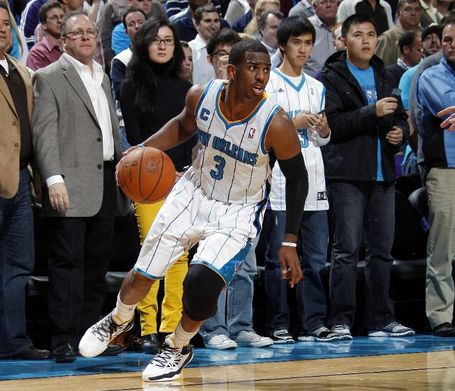 The Defense on Chris Paul
Just like most teams in this league. The Warriors had all kinds of trouble guarding CP3. He gets to whereever he wants and dictates what happens. The Warriors tried multiple different guys, Monta Ellis, Stephen Curry, and Dorell Wright. I thought Wright did a decent job because he's taller and longer so he can bother him a bit more. But that leaves the smaller Ellis and Curry to guard the small forward. Turns out that was okay. Paul still finished with an incredible game - 24 points (6-12 from the field, 10-14 from the line), 13 assists, 6 boards, and 2 turnovers. He played 38 minutes, but in the first 3 quarters when he was on the bench, it seemed like the Warriors were able to make runs to get back in the game.

If we were to compare Stephen Curry and Chris Paul right now, they're offensive games are very different. Both are productive in different ways with Paul obviously the better of the two. But it's the defensive side of the ball that really sets Paul apart from many other point guards. He is such a good on the ball defender and he makes it tough for the opposing guards to do what they want.

One Last (Quiet) Thought
Is it me or was the crowd really, really quiet? Outside of a few minutes towards the end of the 4th, the crowd was so quiet. It was so quiet that you could clearly hear the players shoes squeaking on the floor, the players talking to each other, and plays being called out. It was actually a little odd, like I was watching a scrimmage. It clearly wasn't a full arena and clear why there are rumors that Larry Ellison wants to buy the Hornets and move them to San Jose. What?

Monta Ellis. Even though he didn't shoot particularly well, 10-23 from the field for 29 points, I thought he was so important to the win tonight. I just don't know how to describe it. He worked his butt off and felt like he was the rock or foundation for tonight's win. With everything swirling around and around, I felt he was the calm one the team could count on. Statistically, I'd probably give it to Steph because he shot so well but he played such poor defense I couldn't give it to him. 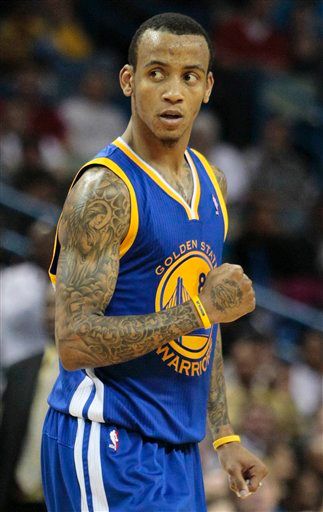