Now that I've written a series of posts introducing and applying my new offensive scoring metric Position- and Shot-Adjusted Marginal Scoring (PSAMS), I'm going to turn my attention to the defensive side of the ball. It turns out that with a little modification PSAMS can be turned into PSAMD (where the "D" is for defense). Here, I'll give some explanation of the defensive version of this metric, and apply it to the center position.

In general, we should be quite a bit more skeptical of defensive statistics that utilize box score or play-by-play (PBP) data. That certainly applies here. In a nutshell, the main issue is that when a basket is scored, we definitely know who scored. Unfortunately, we don't know for sure by looking at the box score or PBP who was responsible for defending the play (i.e. who got scored on). Moreover, the entire team bears some responsibility for defense, not just one defender. (Of course, it should be obvious that the latter point is also true for offense to some extent.)

At any rate, we can make some simple assumptions and check whether the model makes some sense. Before getting into the model, itself, let me explain how I gathered the data. I use a programming language (Ruby) to parse and collect data from PBP files made available by Aaron Barzalai who runs the website BasketballValue.com. In addition to providing the PBP data, Aaron also provides "matchup" files, which enables one to determine for every single play who was on the court for both teams. Although the matchup data doesn't tell us who actually defended each play, it does allow us to determine who was the position-counterpart. When a player scores, we can assign "fault" to the position-counterpart, with the underlying assumption being that over the long run, the assignment of blame to the position-counterpart will capture the bulk of the individual defensive responsibility for that player. TO BE CLEAR, IT'S NOT A PERFECT MEASUREMENT. Just wanted to make sure everyone gets the disclaimer.

Just like in the PSAMS metric, I go through the PBP data programmatically looking for made and missed baskets. In addition, each shot is placed into one of the following categories: DUNK, LAYUP, TIP, HOOK, MID-RANGE, 3PT, FT. For this post, we are going to look at inside shots, which include the first four categories.

Here's how the calculation works using Dwight Howard as an example:

The first term represents the marginal value that Howard's defense creates against his counterpart. The opposing centers averaged 8.1 shots (per 100 non-turnover possessions) against Howard. On those shots, they averaged 58.4% compared to the league average for centers of 62.1%. Therefore, this term is positive, because Howard kept opposing centers below the average efficiency on those shots. The second term in the formula represents the marginal value of the shots that weren't taken against Howard, and instead, became mid-range or 3-pt shots. Recall that on the offensive side, players were penalized for "undershooting". On the defensive side, we reverse things. Howard is actually credited for not allowing opposing centers to take those efficient inside shots. The difference in efficiency (62.1%-50%) is quite large. If a player allows more shots by his counterpart than the average, we penalize the player for the difference between his allowed efficiency and the 50% league average.

Here's a look at the correlation between the counterpart and non-counterpart PSAMD rating. 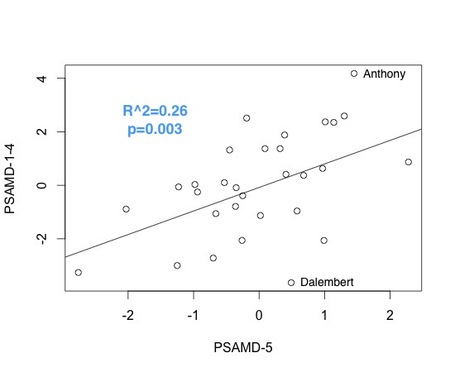 It turns out that there is a pretty good correlation (and it's statistically significant). The R^2=0.26 means that roughly 26% of the (team) defense against positions 1-4 is explained by the (individual) defense against the center counterpart. In plain English, this means that the counterpart metric is doing a fairly good job of telling us who the best interior defenders are. There are some interesting outliers, though. For example, Joel Anthony has a very good counterpart rating, but his non-counterpart rating is much higher than would be predicted by the regression. One explanation for this is that his teammates are exceptionally good at interior defense. I imagine few of you would argue with this logic. Another interesting outlier is Samuel Dalembert. He actually had a slightly above average counterpart rating, but the non-counterpart rating when he is on the floor is the worst among all centers. If Joel Anthony plays with above average interior defenders, it is probably safe to say that Dalembert plays with well-below-average interior defenders.

One name that caught my eye is Ryan Hollins. Might be an interesting name to watch out for next off-season. He's in the last year of his contract (~$3M).