We see you (and your poster) Tony.psd.

The highlights are all you really need to see to get a feel for what last night's Golden State Warriors "We Believe" Charity Game was all about.

If you really want stats for that spectacle, CSN's Matt Steinmetz has 'em in his blog recap of the game.

But as lockout negotiations continued on the other side of the country yesterday, last night's contest between two teams of Warriors past and present was a brief opportunity to just enjoy the talents of some of the world's best basketball players and forget about defense all that we've been missing as a result of this fan demoralizing lockout. 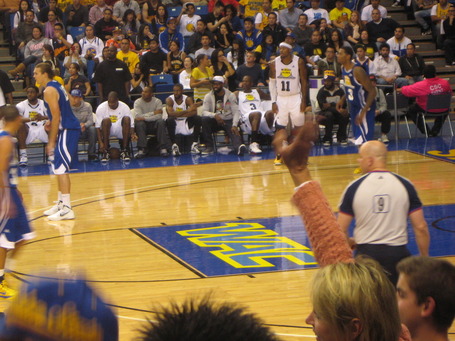 Let's be honest: the prospect of seeing the likes of Baron Davis, Monta Ellis, and Stephen Jackson back on the floor in the game was probably had us excited upon learning about this game moreso than welcoming former Warriors Ike Diogu or Corey Maggette back to the Bay Area. In fact, most of us have probably done more to forget their stints with our beloved franchise.

Nevertheless, it was fun, the 8 of us who went got a chance to catch up on things like the merit of Stephen Jackson missing the game to launch his rap career, and B-Diddy managed to drop dimes in street clothes.