Share All sharing options for: POLLING GSoM: Kwame Brown or Andris Biedrins? Who should the Golden State Warriors start on opening night? 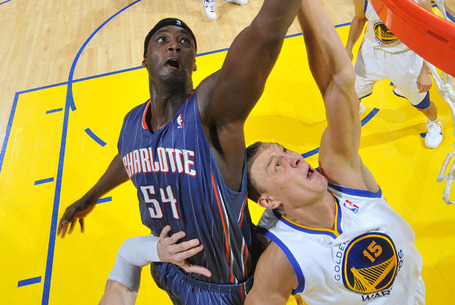 Erick Dampier and Adonal Foyle could take these guys!

In case you missed the BIG news today the Golden State Warriors finally made their BIG move of the offseason that the franchise has been hyping up for quite some time.

Due in large part to the stellar season he had with the Charlotte Bobcats last year, the Warriors decided to ink former #1 overall draft pick Kwame Brown to a 1 year deal at a cool $7 million. I guess the Warriors front office and new ownership really thought Kwame was overpaid last season at $1.2 million.

(Wait, didn't the NBA just have a lockout because the owners were upset about all the foolish contracts they handed out?)

Well the goal here isn't to pretend like this is a BIG, fascinating move for the Warriors. It's to start a dialogue about which of these two should be starting at the 5 spot for the Warriors now. (Shoot, if it was my call I would have amnestied Biedrins and donated that $7 million to the Bring Back Thunder foundation, but we have to live within the real world hoops constraints.)

If I had to pick between the two, I'd go with... actually who am I kidding?
You know, I thought Chris Cohan sold the Warriors over a year ago.