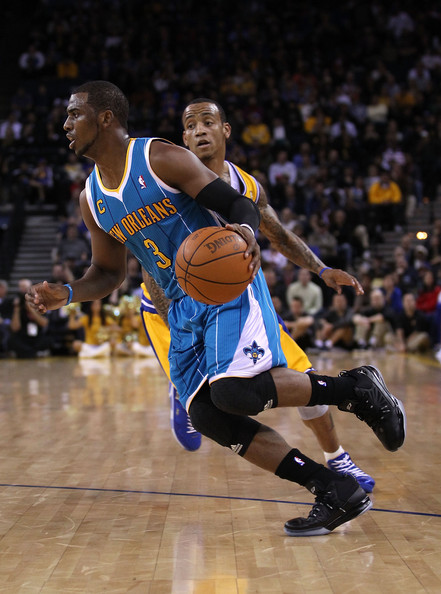 Jump for yet another deal that you know the Warriors won't be able to pull off!

Paul has not reversed field regarding wanting out of New Orleans. Initially blessed with overriding leverage and exhilarating options, CP$'s, relocation program has narrowed to the Celtics (Rajon Rondo continues to be available) and the Warriors (NOLA wants Monta Ellis, Andris Biedrins and rookie Klay Thompson).

(Thanks to amerikmasters for the FanPost.)

This would be incredible. Not only do the Warriors get one of the NBA's few true superstars, but they get to dump their Monta Ellis/ Andris Biedrins problem tandem onto another Western Conference team.

Two undersized players who can't guard a single starter in this league at their respective positions (shooting guard and center)? The Hornets problem.

A 24ppg scorer whose team plays better when he's off the court? The Hornets problem.

A big man who has zero post moves and no range outside of 3 inches from the bucket? The Hornets problem.

$20 million for "franchise cornerstones" that Chris Mullin, Robert Rowell, and Chris Cohan actually thought it was a great idea to destroy WE BELIEVE and build around? The Hornets problem.

If the Warriors have any semblance of a shot, even if Paul is just a 1 year rental, they have to pull the trigger. I'd rather make the playoffs this season and have a fun little run, then waste this year and the next few foolishly waiting on Monta, Biedrins to take this team to 8th place- something they've proved time and time again that they are not capable of.

Who knows? Maybe Warriors fans can convince CP3 to stay here with Stephen Curry too.

Don't forget to check out the fabulous New Orleans Hornets blog At The Hive!