I woke up to the following tweet from @feltbot this morning:

It made more sense when a few minutes later I found out we apparently traded Lou Amundson for the aforementioned Indiana Pacers player. In this article, I'll run through a few stats on these newest acquisitions, who figure to get fairly substantial minutes this season. I did not include Ish Smith because he played so few minutes last season, and my guess is that he won't see the floor that much this season. Make sure to read my Advanced Statistical Primer, if you need to refresh yourself on some of the terminology. 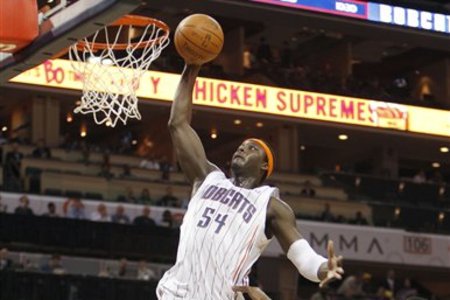 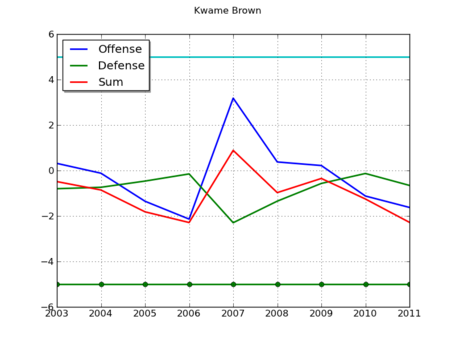 For last season, Kwame's offensive RAPM (ORAPM) was -1.6 and his defensive RAPM (DRAPM) was -0.7 giving a total of -2.3. As much as people have been talking about Kwame's defense, I was fully expecting to see a higher DRAPM. HIs rating isn't terrible, and it looks like he's improved over the past 5 seasons, but anybody expecting Tyson Chandler on defense should think again. By the way, that huge peak in 2007 is likely an anomaly, although in that season with the Lakers, Kwame shot 57.3% TS, which was by far his best as a pro.

These are not terrible numbers. He is slightly above average in terms of inside scoring, and not a good mid-range shooter. Nothing shocking or especially noteworthy here.

According to Synergy, on offense, Kwame's strengths are in the post and rolling on the PNR, although the latter only makes up 9% of his total offensive plays. But his post-up efficiency is far better than anyone on the Warriors last season. Kwame was also (surprisingly) efficient cutting to the basket given his reputation for stone hands. He is not a good spot-up shooter, but he only took 34 of those last season, so we shouldn't worry about that, especially since most likely he won't be playing as many minutes.

Defensively, Kwame appears to be strong defending spot-up shots, ranking 9th in the entire NBA. This hasn't been talked about by anyone in the media, who focus on his post defense (which isn't as strong according to Synergy), but it will be quite welcome on this team when he plays next to Lee. You might remember when I previously discussed Synergy stats for Warriors defense last season, I raved about Udoh's ability to defend the spot-up shot. For reference, Udoh's PPP on those shots was 0.74 and he ranked 12th in the NBA.

Based on his performance last season, I think we can expect Kwame to be a serviceable (ugh, I can't believe I'm using that word, but it fits here) big off the bench, somewhat better than Lou or Gadz, for example. In all likelihood, he will be the 4th big in the rotation coming off the bench behind Udoh. Kwame will be able to give fouls and occasionally have a play set for him. At $7M for 1 year, Kwame is not a long-term risk, and he definitely makes our bench deeper. 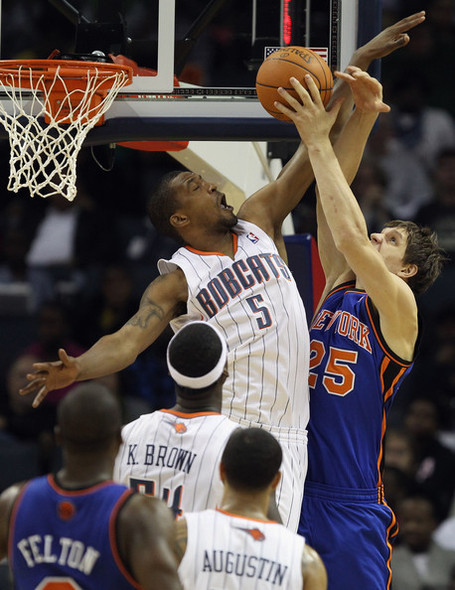 Offense is not his forte. McGuire shots 43.7% TS on 13.8% USG last season. His TOV rate was a low 11.2%, which is much better than his 19% career average. Maybe someone finally told him that he needs to never ever handle the ball. McGuire *can* rebound, though. Dude had a 10.9% OREB% and 21.8% DREB% last season, which is slightly higher than Kwame! That's nice. To put this in perspective, the average OREB% for small forwards was 4.2% last season, and the average OREB% was 13.9%. McGuire crushes those numbers. He should definitely help our rebounding. 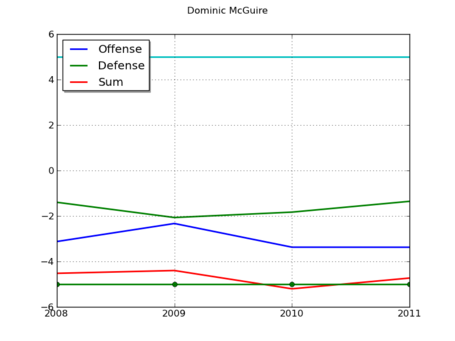 You might want to turn your head now, as McGuire's RAPM ratings are a little scary. His ORAPM last season was -3.4, while his DRAPM was quite a bit better at -1.4. His total RAPM rating was -4.8, which is below replacement level (usually taken to be around -3.3). The ratings are fairly consistent for McGuire over the past several years, suggesting that he really is that bad. Although he did look good in last night's pre-season game, I would be very cautiously optimistic about him after studying these numbers.

McGuire's ezPM rating was +0.74, which is obviously more positive than his RAPM rating. Keep in mind, RAPM and ezPM are two completely different rating methods, and although there is a fairly large amount of correlation between them, they can and often do disagree on players. His O100 was -2.44, which ranked 59/72 for small forward with > 1000 possessions last season. With a -17.5 OEFF rating (#65/72), he is apparently more inept than Kwame Brown on the offensive side. McGuire's D100 was +0.41, which ranked 52/72. His counterparts shots 54.2% eFG% against him (ranking 45/72). Where McGuire looks really good according to ezPM should come as no surprise...His REB100 rating was +2.77 which ranked 1st among this group. On a team that desperately needs to improve rebounding, that looks pretty good.

N/A (I didn't include him in my calculations because he didn't meet my original possession cutoff.)

The story that Synergy tells is similar to the other stats. Offensively, McGuire is inept. Why he shoots so many jumpers is beyond me. Someone needs to tell him to stop doing that, hopefully, Mark Jackson realizes this. Defensively, Dominic uses his size to effectively defend ISO and POST. His SPOT defense is average, but on this team, for a guy coming off the bench and costing as little as he does, that's probably good enough.

Dominic is the definition of a specialist, although I'm not quite sure whether his specialty is defense or rebounding at this point. Regardless, on this team, both those parts of his game will undoubtedly help, and his offensive shortcomings will likely be tolerable on most nights. 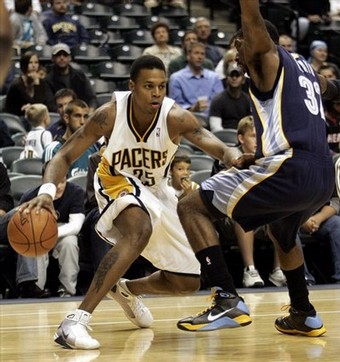 The newest Warriors acquisition is Brandon Rush (apparently), coming over from the Pacers. Rush has improved his TS% each of his 3 years in the league: 50.5%, 52.2%, and 54.0% last season. That's a positive sign. His USG was 15.9% last season which is below the average of 20% for SG. Rush is therefore currently a low-volume shooter with average efficiency, but he appears to be trending upward. His OREB% and DREB% were 2.1% and 11.6%, both right around the league averages for shooting guards. His TOV% was 10.2, which is below the average of 12% for SG. So far, these numbers are encouraging. 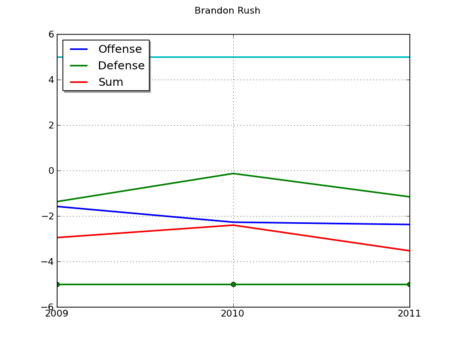 Rush's ORAPM last season was -2.4. His DRAPM was -1.2. Add these two together for a -3.6 total RAPM rating, which isn't good at all. Moreover, that hint of positive trending in his shooting efficiency doesn't appear to show up in his ORAPM curve over the last three seasons (blue line).

Rush's counterparts at SG only shot 47.7 eFG% against him, which was 5th among the 54 SG in this group. Rush and Paul George clearly made a great defensive combo on the perimeter for Indiana last season.

Rush is below average in all categories except 3-pt shooting. He doesn't draw a lot of fouls and his mid-range efficiency is not that great.

Rush is an interesting case. His offensive Synergy stats seem at odds with his RAPM rating. According to Synergy, Rush is a very capable spot-up shooter and score in a number of different ways. His defensive numbers are also quite good, with the lone exception of defense on spot-up plays, where he is somewhat below average. Overall, with his positive ISO and PNR ratings, Rush appears to be an above average on-ball defender.

Rush demonstrates why it is important to look at multiple stats when evaluating a player. His RAPM rating suggests a player that is well below average, but his "traditional" advanced stats (TS%, REB%, TOV%, etc), his ezPM, and Synergy stats present a somewhat different story. Given that Amundson was in all likelihood going to have a smaller role this season, and that we let Reggie Williams go, I think Rush may end up being a really nice addition to this team. He's 26, so we cannot expect too much more improvement. But as long as he gives 100% effort for Mark Jackson, and is content with a role coming off the bench, my guess is that Rush could end up being this year's Dorell Wright. A solid acquisition who will appear to be a bargain this season. Also, he's in the last year of his rookie contract, so he will be looking to impress (and make more money next year!).

Each of these acquisitions in isolation are not awe-inspiring, but taken together, they suggest a real commitment to defense and rebounding improvement this year. There is no doubt that Tyson Chandler would have made a bigger impact, but to be honest, I think I'm happier with these 3 moves in combination, than I would have been handing over a truckload of cash over several seasons to DeAndre Jordan. Jackson and Riley definitely have talked the talk when it comes to defense, and now it appears they really are starting to walk the walk. To sum up:

These are some grown man moves that we made here.