This report is absurdly late, but I had some photos from last week's TweediaDay (linksannouncement). I'll start off with the above, which was hinted at by some of the guys in the Warriors' sales department who alluded to a refurbished front office. This is what you see as you enter the hallway leading to the practice facility. Copperplate is here to stay, folks! 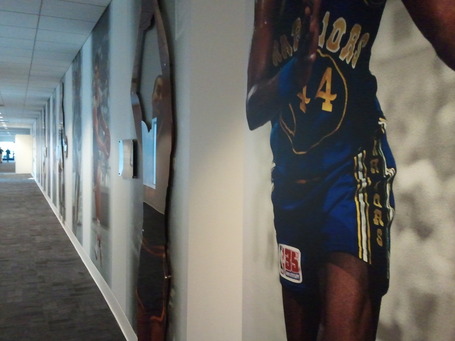 Admittedly, due to bad timing with work among other things, I came ill-prepared (you guys weren't much help, either!) for this year's TweediaDay, which is a shame because I knew from last year's experience that it would be best to come with a set of questions for specific players. And the more obscure the player, the more interesting.

After I got my name tag and Media Day Preseason Guide from Warriors PR staffperson Brett, I immediately noticed several players in uniform whom I had never heard of. Some of them weren't even in the Media Guide that was handed to me! These guys would eventually be cut from training camp late last week. Meanwhile, some of the more recognizable players like David Lee were already posing for the requisite photos that will probably end up official Media Guide that people can purchase. 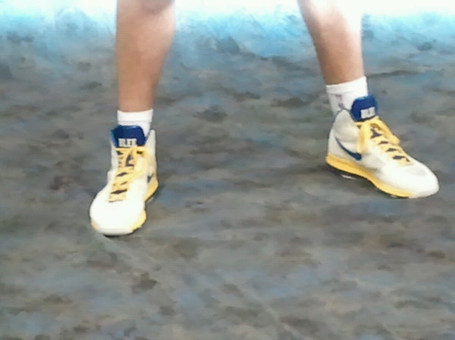 I noticed that Lee's shoes had "D.LEE" on the tongue. I asked PR assistant Ben Chen and he said that Lee has had that sort of thing going on for awhile now.

Monta Ellis was also already in the process of getting many photos taken. I noticed that he wasn't wearing And1's, which I could've sworn he had once declared loyalty with. I found out later that people were already talking about this after Day One of Training Camp, as he was spotted in the same Jordans. I tweeted it out and people responded saying those were Jordan 8.0s. 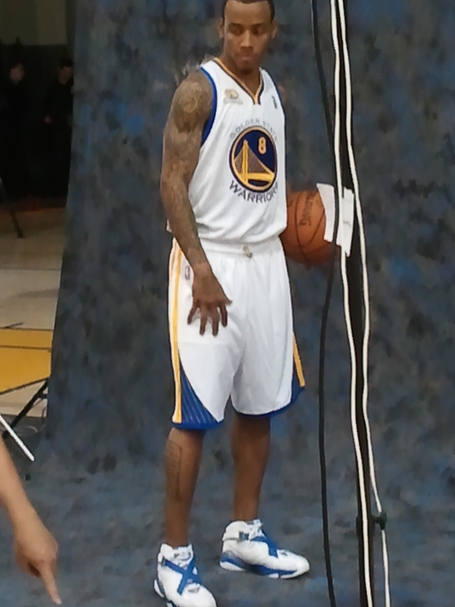 So I wanted to ask Monta about his And1 deal (or lack thereof), but I had to wait as the photographer pulled out a small acrylic trophy for Monta to hold. I took a peek and it said "NBA Minutes Leader". Ekpe Udoh walked by and joked about it and Monta retorted by saying, "You gotta do your time, put in work to get one of these, young fella." 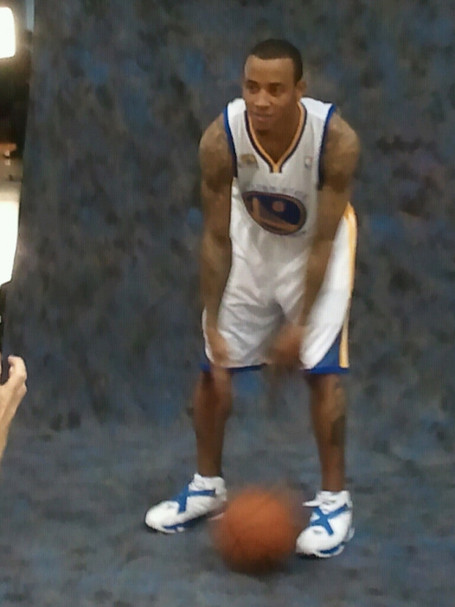 Now, I know perfectly well from last year that if you want to talk to Monta, you better sneak your question in there as he's striding off to the next Media Day obligation. He's not one to stick around and engage in a conversation/interview, at least not until he sits down with the awaiting Matt Steinmetz at the roundtables. Again, a review of my exchange with Monta last year (paraphrasing):

Me: "Monta, did you get any new tattoos?"

Me: (as he is walking away to the next thing) "Did you get one with the new Warriors logo?"

Monta: (in stride, exiting stage left) "Yeah, I got that."

[hurries off to the video shoot -- damn, this guy is quick!]

Here's the exchange this year:

Me: "Monta, what kind of shoes are those?"

Monta: (in stride, exiting stage left) "I'm not with them anymore."

[hurries off to the video shoot -- dude has not lost a step!]

If you look at Media Day from the standpoint of the players, you'll see that they all have these responsibilities: signing autographs for a specific cause, doing photo and video shoots for official Warriors media, and doing interviews. 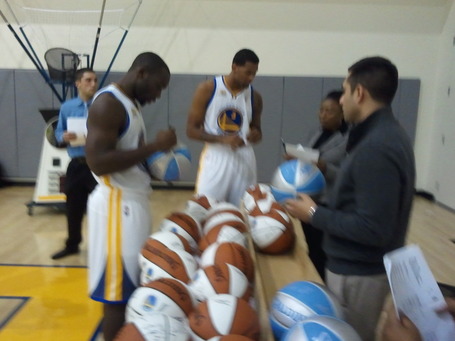 This year, the Warriors' PR dept also added an Internet station so that "interviews" or whatever could be done via Twitter or Facebook. As I mentioned, I came ill-prepared so I didn't really take advantage of that. I'm still not quite sure what I would have done differently other than just the traditional one-on-one interview. 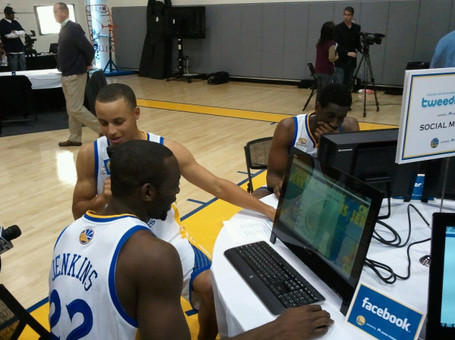 Then Stephen Curry walked by and roving video reporter Franco Finn asked him a bunch of questions. OK, so here's my take on Curry looking "bigger". While his shoulders look a tad bigger and he's got some more definition, he's still pretty skinny. And don't forget, the interview he did with Jim Barnett was in widescreen, so he looked bigger by default there. 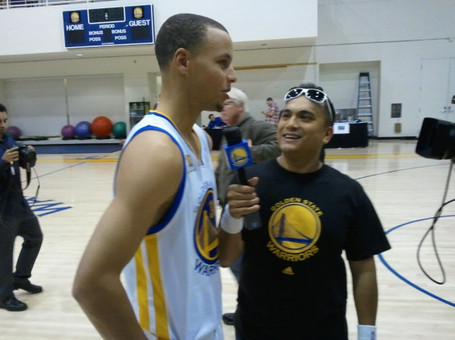 Steph is certainly not as bulky as Charles Jenkins, who has an NBA-ready physique: 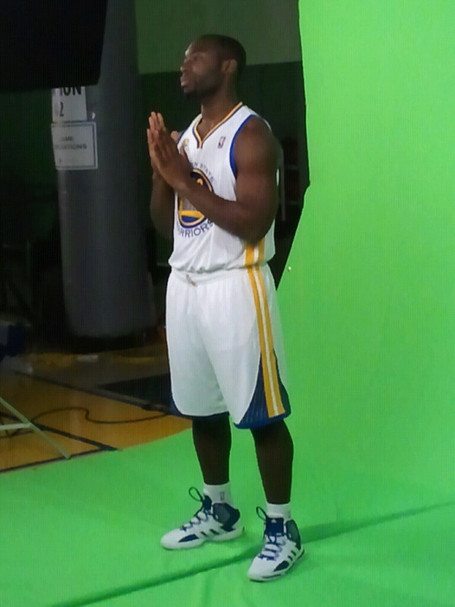 As I walked around, I noticed that Andris Biedrins was about to go on the air with Ralph Barbieri and Tom Tolbert on KNBR. By the way, Tom is a huge man. I'm sure AB was about to get grilled. 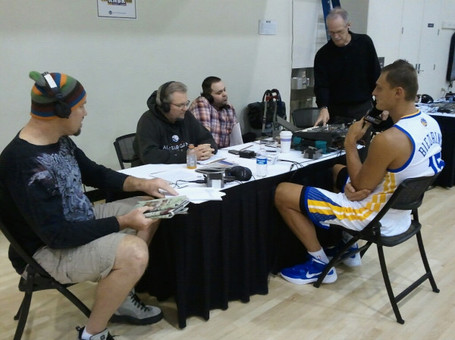 I also got the chance to speak one-on-one with Jeremy Tyler. I was interested in his experience in Japan with Coach Bob Hill, who two years ago helped train Blake Griffin right here in the Bay Area, prior to the Draft. I got to meet Hill and some of the other future draft picks such as Patrick Patterson and Daniel Orton that summer.

Tyler said Hill was a like a father-figure to him and taught him everything from X's and O's to the mental aspects of the game. Tyler reiterated a quote that I had heard before, that Hill said if he transplanted his brain into Tyler's, Tyler would be one of the best big men in the game. They spent extra time together outside the gym during the stint with the Tokyo Apache. One of the many epithets Hill gave Tyler was, "Enemies will stab you in the back, but friends will stab you in the front." That was, of course, Hill's way of telling Tyler that he wasn't going to sugarcoat anything. 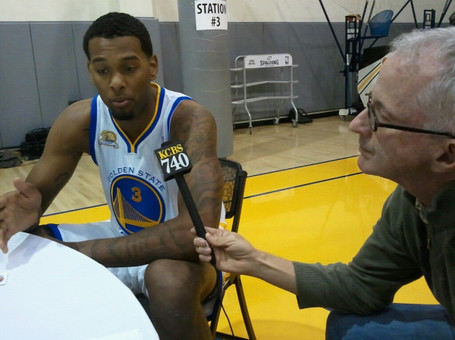 It was kinda cool that Steve Bitker of KCBS Radio was paying attention to my conversation with Tyler, then picked it up from there and asked a few more questions about Tyler's experience with Hill in Japan. I wonder if those sound bites were ever aired on KCBS 740? (There's no sign of them on the KCBS website.)

I also took the opportunity to snap a close-up of the Warriors' 50th Season patch: 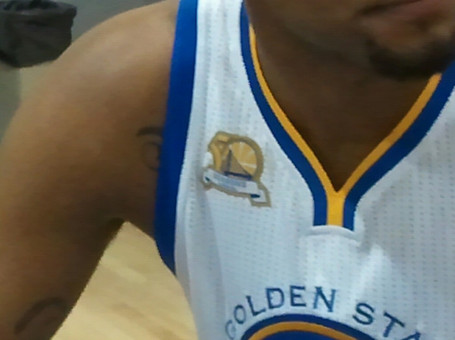 At that moment in time, someone on Twitter commented that Tyler's upper frame looked kind of skinny. I agree, but at the same time, and this goes for Steph too, let's remember these athletes are barely passing the age of 21, if that. Their bodies will catch up soon and have more of a capacity to bulk up.

I was actually going to ask Steph about his workout regimen, but right at that moment he was headed to the roundtable session, where Rusty Simmons pulled a Steinmetz and was already waiting for him. Interestingly, Simmons's Media Day article focused more on Monta.

Then walked in a lanky, hairy dude donning a Warriors uniform: 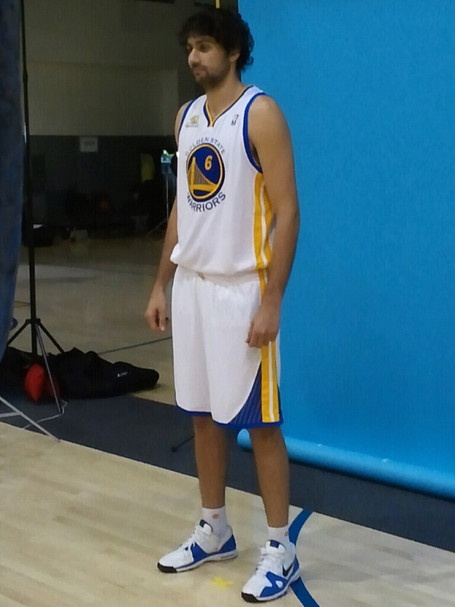 His name, according to the piece of paper the photographer handed to him, was Julian Khazzouh. Within minutes via Twitter, I discovered that he was one of the better centers in the Australian League.

Finally, it was Monta's turn at the roundtable, and sure enough just like last year, Steinmetz was waiting for him. You can see this interview and more from the aforementioned links, but basically Monta addressed Biedrins and the non-signing of DeAndre Jordan. On Biedrins, Monta said that Beans now has an extra glow which is probably due to a baby joining his household. On DeAndre, Monta said he had no reaction to the Warriors not being able to sign him. But what else was Monta supposed to say? Although fans wanna know, Monta's got to exude professionalism, so I suppose he passed that question with flying colors. 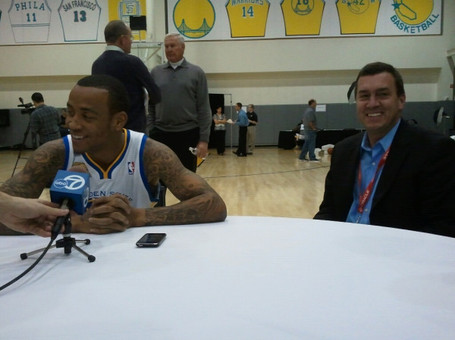 Rusty also alluded to the photo of Monta typing in something on the Warriors official team Facebook page, by saying, "Hey I heard you're on Facebook." Monta replied (paraphrasing), "If there's a Facebook, that's not me. You won't see me on Facebook or Twitter."

The last bit of curiosity I had was seeing Marcus Thompson in a Pittsburgh Pirates hat (here with Steinmetz): 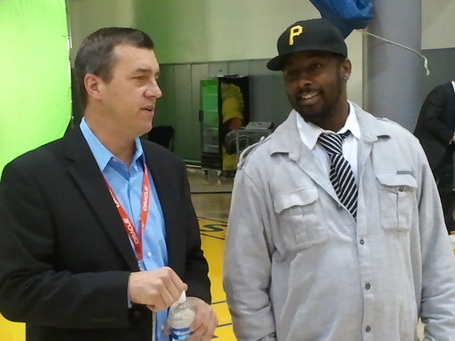 Finally, Joe Lacob appeared and gave Steph a fatherly hug, then chatted with various people. I asked about the list of nine big men from last year's Season Ticket Holder Conference Call. Lacob said he didn't recall that list of nine, but they certainly had the list of four that we all know about. Daniel Leroux gives some valuable takeaways from the vibe he got with Lacob as well as Bob Myers.

At that point, not enough time had passed for me in pondering the Chris Paul situation to challenge Lacob with a tough question. As many of you know, my day job with Dream League is deeply rooted in the community, including the process of earning street-level respect in this predominantly urban sport called basketball. Every week as I go to our league games, I enter a world where you can observe people displaying the swagger and the vernacular of the inner city through the platform of basketball.

If I may be so bold while going on this tangent (check out Leroux's take), I think that a slightly more committed approach to CP3, despite CP3 not showing any signs of a contract extension, would have yielded some dividends in the "earning street-level respect" department that is so critical in signing marquee free agents these days. Unfortunately, I think it was an opportunity missed. I'm not sure the ownership group "gets that". I'm still feeling my way around this gut instinct, too, so I don't know how to articulate this very well.

Again, I'm saying the Warriors should have taken the CP3 deal a bit further to show the rest of the league a little something, rather than the obvious balk at the non-extension. I'm not saying Steph should have been traded outright because I realize how important Steph is to this franchise. When you're rumored to be in talks with a major superstar, milk that a little bit more, to show that you actually belong in such discussions.

But I digress. All in all it was another fun time at Warriors TweediaDay, despite the lack of free food like they had last year and the fact that there's only a two-hour max on metered street parking outside. I'll try harder to bring good questions to ask the big boys and more ahead of time next year via Golden State Of Mind.

Here are a few more links I found:

BayAreaSportsGuy: Udoh, Biedrins, and an interview with Klay Thompson.