Everyone one knows the Warriors need quality bigs. One other important element that this team is short on (haha) are backup wings. Reggie Williams is a free agent. Klay Thompson is a rookie who has played mostly at the 2. Who is going to be Dorell's backup? It's not a small concern (hehe). Jump for the stats.

Like I did previously for bigs, I'm plotting offensive and defensive RAPM along with offensive and defensive ezPM100. The graph is sorted in descending order by the average of RAPM + ezPM100, which we can think of as "total impact" ("double impact" would have been my first choice, but unfortunately, it reminds me too much of a terrible Van Damme movie). 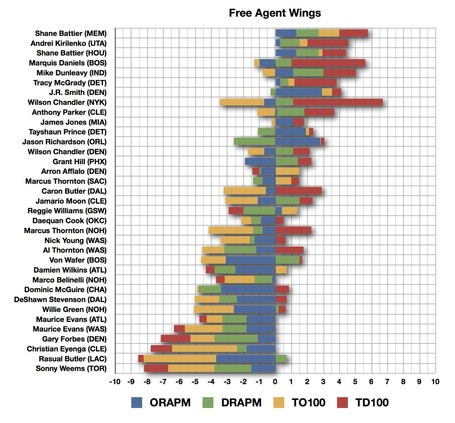 I'm not entirely enamored with our choices. It's been rumored that Battier will be headed to Miami. I don't think the FO would be interested in brining back Dunleavy (or Richardson for that matter), although if he could be signed on a reasonable contract, he'd probably help us quite a bit. Marquis Daniels brings the defense, but he's 30 and coming off an injury. AK47 is coming off a huge contract, and has a history of injuries, but he's another guy who could obviously help us, given a reasonable contract size. I'm surprised to see McGrady so high on the list, to be honest. Reggie comes in about halfway down the list. So, what do you guys think? Anyone that seems particularly interesting?