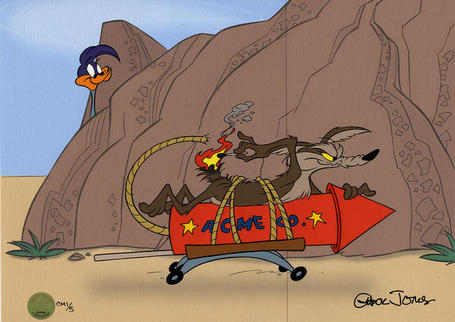 It's hard to catch the road runner when you screw yourself over.

Golden State Warriors (23-28) @ Phoenix Suns (24-25)
TV: CSN Bay Area / Radio: KTCT 1050
Tip-Off: 6:00 pm PST
Blog Buddy: Bright Side of the Sun
With the taste of defeat against the Suns from Monday still fresh in mind, many Warriors fans are clamoring for revenge against the Suns in tonight's rematch. After all, they embarrassed us on our floor, so it's only fitting that we embarrass them on theirs. The only problem is that much of the Warriors embarrassment came from themselves. They did not look sharp, they were out of sync with each other, and couldn't hit a shot to save their lives.

So if the Warriors want revenge tonight, the first thing they must do is... show up for the game!

A few notes taken from what little I can still remember from the last game: