Recap #54: Golden State Warriors 102 vs New Orleans Hornets 89 - Warriors Find the Cure for a Hangover... On the Bench!

Share All sharing options for: Recap #54: Golden State Warriors 102 vs New Orleans Hornets 89 - Warriors Find the Cure for a Hangover... On the Bench! 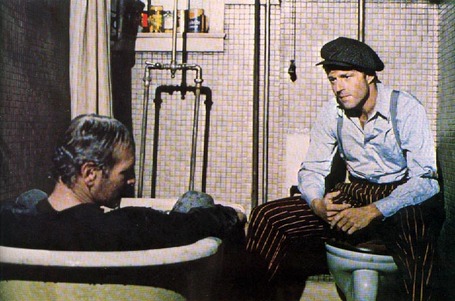 Pictured: Coach Smart (right) deciding what to do with a hungover Warriors team after the first quarter. Should he use the old ice water in the sink trick, or just go to the bench?

Heading in to this game I was worried about the Warriors coming out hungover after another good win on Sunday, and after the first quarter I thought it was going to be another long night. The Hornets came out and built a ten point lead in the first thanks to some sluggish rotations on defense. The Hornets were finding the open man and the Warriors weren't closing out on their shooters well at all. Add to that some costly turnovers and silly fouls (Steph and Monta looked out of sorts early), and you had a recipe for an ugly loss. At the start of the second quarter, knowing that the Warriors had a game in Utah the next night, Smart decided to go to the bench, and it paid off.

I've been critical of the way Smart makes wholesale substitutions leaving one or two starters to play with a bench that hasn't proven itself to be productive. In this case I could actually see where he was coming from though. With an ugly first quarter and the starting backcourt in foul trouble, it felt like one of those moments where someone unexpected would need to step up. Early in the second Smart decided to roll out a line-up of Lin, Bell, Dorell, Vlad, and Udoh. That is the kind of lineup that makes me want to throw up a bit, but they completely changed the tone of the game. They came in and played aggressive and frustrating defense, which is what you should hope for with those guys, but the question everyone was asking (including Fitz on the broadcast) was "Who is going to score the Basketball?" Well Radmanovic and Dorell Wright stepped up with some much needed offense and helped that lineup cut seven points off the lead in about six minutes of play. 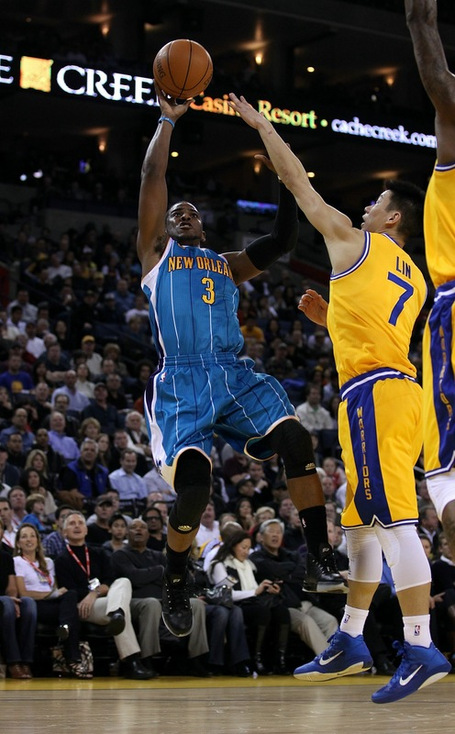 With the Warriors bench setting the tone on defense Chris Paul's shots got a lot tougher.
About halfway through the second Quarter Smart put Monta and Steph back in the game, who seemed like they were inspired by the bench performance. Monta came in with hot shooting scoring 10 in the last six minutes of the second, and Curry was playing surprisingly tough D on Paul in that stretch. It was really more about team play than individual performances though, as the bench set the tone, and the entire team seemed to pick it up and play solid, active defense, and move the ball on offense to find good shots for everyone. By halftime the Warriors had the lead, and they never looked back.

This was a solid win for everyone involved. From Smart to the tenth man, this was one of those team-building games, where guys learn to trust each other and further buy into the team concept. This has been a top heavy team for most of the season, with Monta shouldering most of the minutes and scoring, and the starters being the ones relied upon to keep the team competitive. Smart chose to put his trust in the bench last night, and they came through for the team in a big way. That could do wonders for the mentality of the team moving forward. If you buy into the idea of team synergy creating a greater-than-sum result, then last night was a great sign.

This could have gone to Dorell Wright for his great all around game, and being the on-court leader early in the second quarter, or Radmanovic for his timely scoring, or Bell for his lock down D, or Smart for sticking his neck out and coming up with great results, but I have to go with the bench as a whole. I called out the Warriors bench in the game preview, asking for someone to step up and surprise me, and as it turns out, they all did. Great effort! Let's hope this is a turning point for the team. It certainly felt like one.