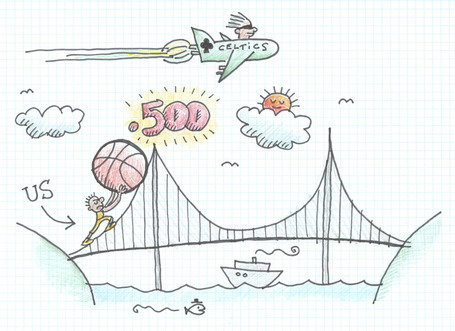 Or, the Battle for Sleepy's soul. Regulars here may know that, being Boston born and bred, I'm congenitally a Celtics fan. I gradually converted to Warrior fandom sometime around the mid-late 80s, following the death of Bias and subsequent decline of the Bird generation, which more or less coincided with my move to the Bay Area, where I resided from my Freshman year of college till my mid 30s. Actually, I had first flirted with the Ws as a wee tyke in '75, for no other reason than that I thought "Golden State Warriors" was the coolest, most alluring name ever — "where is this mystical Golden State, and why can't I live there instead of freezing old provincial New England?" The flirtation blossomed into something more during the Sleepy Floyd era (Greg Papa's calls of games got me through many a night of studying at Cal), was ratcheted up a notch during the Run-TMC era, and became full-fledged obsession starting in '93 with the drafting of Webber. (I actually named my cat "Chris Webber"). Jump for more babbling...

Of course, like most other other birth defects, your first sports allegiances rarely leave you completely; and these days, it's tough for a Boston kid not to love the Celtics. Those pure white-and-green unis, the spirit of UBUNTU fostered by Doc Rivers, the sight of Ray and PP and KG and Shaq joking and bonding with Bill Russell ... really, what's a Bostonian to do? I love these guys. Not more than the Ws, but, like, lots. If I were a betting man, I'd put their chances of going all the way slightly behind that of the Heat — roughly, in a group with LA, SA, and ORL. As long as the core stays healthy, they've got a fighting chance. Never underestimate the heart of a champion, as Rudy T said. When the Warriors season ends, I'm jumping on Celtics bandwagon without a moment's hesitation. Call me a two-timer if you must.

In the meantime, here are our Warriors, pushing inexorably towards our championship — the magical .500 mark — and defending our homecourt against a bunch of big bullies from the East Coast. Yeah, that stupid number has huge psychological significance for me. For all our fits and starts and regressions and questionable moves and flaws... as many wins as losses. Somehow it gives the whole franchise a different aura. Must ... get ... there.

I'd say our chances of pulling within two games of that magical barrier tonight aren't great, but did I mention that we OWN these guys in Oakland? Indeed, the last time the Cs beat us at home (29 December 2003), George W was still in his first term, the first Lord of the Rings was duking it out with Finding Nemo at the box office, and Red Sox had just completed their 85th straight season without a championship (Aaron Boone says "hi.") The Ws illustrious starting five consisted of Nick Van Exel, Jason Richardson, Cliff Robinson, Mike Dunleavy Jr, and Erick Dampier, while the Cs trotted out Jiri Welsch (who had been traded from the Ws four months earlier), Mike James, Walter McCarty, Vin Baker, and Paul Pierce. I'd say Pierce's supporting cast has improved a bit in intervening years.

Actually, so has our cast of characters ... but only a bit, alas.

• Curry runs around Rondo as if he were a steel mesh Jerry West cut-out: 25 points, 12 dimes.

• Monta sticks it to the all-star voters and makes Ray Allen's mom cry by dropping 37 points on 15-24 FG.

Of the teams with a legit NBA title shot, who are you pulling for?