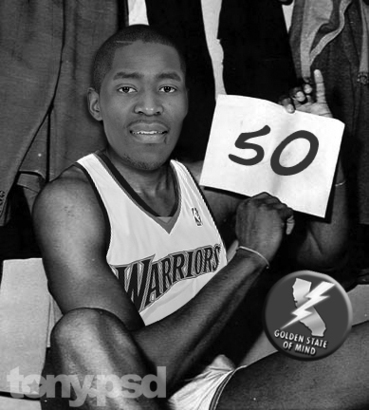 Welcome back JC! Don't drop 50 on us please!

Yesterday might've been pretty frustrating for Warriors fans, but one thing to be happy about is that the bottom of the West is weaker. No more Deron Williams and no more Carmelo Anthony. Even the Clippers took a step back by bundling Baron Davis off with a lottery pick. You really never know what's going to happen, but right now it looks like the West won't be as tough in the short term. The Warriors have a realistic shot at the playoffs next year and still have an outside chance of getting there this year.

Jump if you want to be more active than the Warriors on trade deadline day relative to the rest of the league!

Mike Bibby for Kirk Hinrich was a slick upgrade. Joe Johnson is just a few notches below an All-NBA talent. I'm still sticking with Stephen Curry and Monta Ellis. I just don't see the Dubs guard tandem stinking up the joint two games in a row at home.

Al Horford is having the finest season of his pro career and Josh Smith is one of the league's most underrated players. Charmin soft defense and silly fouls from Andris Biedrins aren't going to help. It's going to take a season high game and some unusual stellar defense from David Lee to even make this even close.

Oh no! What are the Warriors going to do without Brandan Wright and Dan Gadzuric off the bench?! Meanwhile the reigning 6th man of the year is yet another player Chris Cohan gave away to save some dough.

Who should Coach Keith Smart start at center?