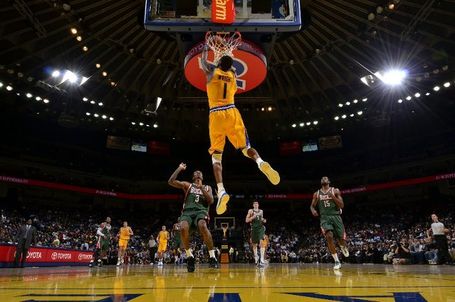 Reverse alley oop off a 70 foot pass from Steph!

In a game the Warriors had a very good chance of winning, they took care of business and got the W. In the end, it doesn't matter how they got the win. At the end of the season, the W doesn't come with an asterisk saying that the Bucks didn't have Andrew Bogut, Drew Gooden, and played with a still recovering Brandon Jennings. None of the Warriors L's early in the season come with asterisks about injuries. None of the Warriors past 17 years comes with an asterisk about having a crappy owner.

Stephen Curry vs Brandon Jennings
In what some had hoped would be a matchup of popular young players, the matchup fizzled. Curry got the upper hand with the better night but it was far from spectacular. It was actually kind of boring with Jennings still recovering from foot surgery. Given Jennings' 38% FG this year (actually improving on his 37% from last year), I'm surprised teams don't just let him shoot more. He fired up some bricks tonight and I was yelling at the tv to let him shoot, Brandon "Let Him Shoot" Jennings sounds a little better than Brandon "He Scored 55 Points In One Game" Jennings. He's like that guy in the pickup game who can't shoot but thinks he can, so you let him and he misses over and over.

Whoa. That's a lot of turnovers. Take care of the ball please. It's the only one you have. 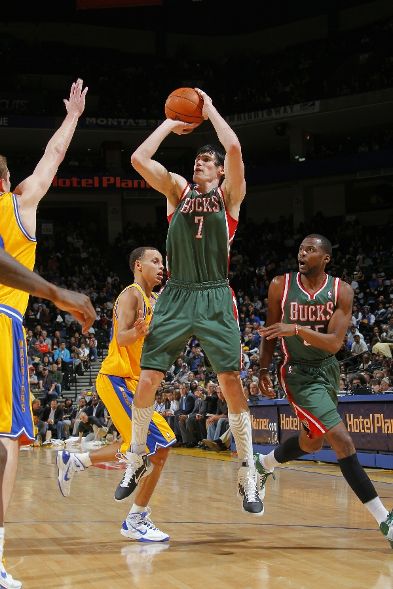 The Ersan Ilyasova Show
The 1st quarter was dominated by Ilyasova. The Bucks scored 22 points in that 1st quarter, Ilyasova had 15 of them! He also had 6 rebounds. He finished with 23 points and 13 rebounds.

With Biedrins matched up on him in the 1st quarter it reminded me a lot of how Don Nelson used Al Harrington as his center to match up against the opposing team's slower center. Biedrins couldn't guard Ilyasova on the perimeter so Ilyasova got nearly every shot he wanted. And he drained them. On the other end, Biedrins was able to use his extra height to grab some offensive boards but he couldn't compete in the scoring department.

A Nice (Shooting) Touch
The Bucks are the 10th best defensive field goal shooting percentage in the league holding opponents to 44.8%. In the first quarter, it looked like the Warriors were going to struggle more against that tough D of the Bucks. They had trouble scoring, going just 7-21 from the field for 18 points.

But then they turned it on.

The Warriors finished at 50.6% for the game. 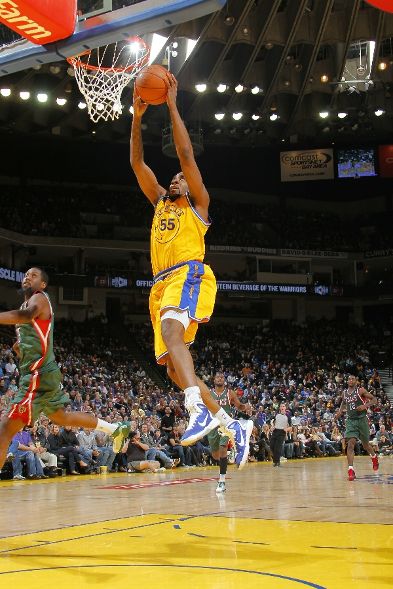 Some Bench Help
Nellie was recently interviewed on KNBR with Ralph and Tom, his first and last radio appearance. Here's what he had to say about the bench:

They're just not very deep. They can't score the ball off the bench like you would like," Nelson said. "They compete and try, but I don't know if they're a playoff team this year. Your team isn't that strong. That's the bottom line.

I don't think there are any Warriors fans who would argue with that assessment. Reggie Williams has been nice but that's about it. Vlad has played better recently but was awful to begin the season. Louis Amundson has never found his groove. Ekpe Udoh is up and down. Brandan Wright is always injured, so he never develops. There's no real backup point guard. Dan Gadzuric is well, Dan Gadzuric. Too bad he didn't get to face his former team (DNP-CD).

But tonight was just a little different than "no bench help at all". Reggie Williams and Vladimir Radmanovic gave them some quality minutes. The starters still played a lot, they had 3 days rest after all.

These aren't great numbers, but they are productive and that's what you want off the bench.

Corey Maggette Returns
...and nobody cares. He had a nice game with 21 points on 8-14 shooting. 0 rebounds.

More turnovers than assists, steals, and blocks combined. That's the Corey we know.

The Bucks out-rebounded the Warriors 49 to 36 including 20 offensive boards. With the Warriors hot shooting, that's how the Bucks stayed in the game. Can someone please box out?

It was a nice bounce back game from Ellis. He stunk it up with 2 points against the Jazz (but they won anyway), didn't make the All-Star team (didn't deserve to) and comes back with a great effort.