You broke my heart, Warriors.

SB Nation: Bay Area | Arizona | Bright Side of the Sun

Joy. Nothing I relish more than writing a recap of a game like this. Trudging home through 20° cold, after a long day of work, all I could think was, "I can't wait to get home, kick off my shoes, and find something interesting to write about last night's loss." Ugh.

Even as Warriors losses go, this one was tough for me to swallow. Somehow, I had got it in my head that the Ws were going to come out and torch the Suns. It wasn't just the three game winning streak — that could have been just normal statistical clustering. It was, specifically, the win against the Bulls. They had looked like a new team. The defense had been as crisp and active in their rotations as I'd seen them since the We Believe run. To a man, the whole team had just seemed stoked — lively, alert, harmonious, driven, ready to put the desultory 22-27 start behind them and make a dead sprint to at .500 and a possible #8 seed. By the 6:30 mark of the first quarter last night — the moment when Channing Frye's third three dropped through the net to give the Suns a 20-6 lead — all that harmonious mojo had vanished. T.K.O. The Ws never really found their way off the mat.

But you know what? Tonight I'm not going to start sniffing around for scapegoats. I don't have the energy for it, and it's dull. As they say, things are never as bad as they seem after a loss, and never as good as they seem after a win. This is only truer in the golden age of the blog, in which the urge to vent immediately nearly always trumps the ability to be thoughtful, measured, and dispassionate. (Heck, if they really want to avoid knee-jerk venting, they should ask the mods to wait 2-3 days before writing the recaps). In the end there was only one real goat to scape: the fact that Curry, Wright and Monta collectively couldn't throw the ball in the Bay. They were a combined 15 for 47 from the floor — 1 for 13 from three. That's not going to happen very often. Some nights you just can't buy one, and it needn't be any more complex than that.

Anyway, if Atma Bro can use his post-Bulls-victory recap to point out some of the team's flaws, I'll do the reverse: use this miserable loss to accen-chu-ate a few positives. Jump for five reasons, beyond the Giants' impending defense of their World Champion crown, not to jump off the Bay Bridge.

1. Ekpe Udoh. See below the big thunderstruck "WW" for details.

2. Twelve boards for Monta. Most likely a fluke, but as long as we're accentuating positives: if Monta can get back anywhere near the solid 4.7 rebounds per 36 that he averaged during his career 2007-08 season, I'd feel a whole lot more confident about the medium-term sustainability of our starting five. Last night's dozen Rodmans got him up over 3.0 per 36 for the season. Keep it up, 'Tay.

3. Defense in the 4th quarter. Sure, a bit of it was when Nash was resting, but for a fairly long stretch there the Ws' D resembled the active, physical, rotating five-headed beast they had been two nights earlier against Chicago. Before Frye's dagger three with 4:20 left in the game (the first of three rapid fire bombs that sealed the Ws fate) they had harassed and beleaguered the Suns into missing 13 of their first 15 shots and nearly gotten the team back in the game. Indeed, had Monta and Steph done a better job in the 4th of feeding the piping-hot Mr. Potatohead, the Ws might well have parlayed that strong defensive effort into a lead.

4. Reggie Williams. Did I mention that I <3 Mr. Potatohead? I mean, not only is he duplicating his efficient scoring from last year's eye-opening season (16.4 pts per 36 on .595 ts this season, compared to 16.8 and .588 last season), but he just seems like such an adorable guy. The Sleepyette laughs whenever she sees him.

5. The fact that Vince Carter isn't on the Warriors.

And now, without further ado... 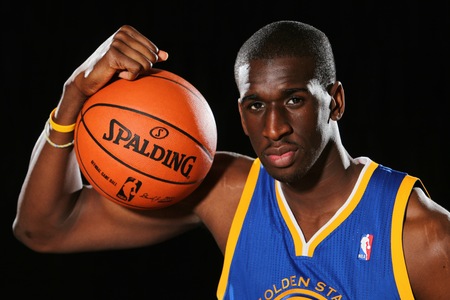 I know, citing plus-minus in small sample sizes is silly, but damn, Ekpe Udoh was a +13 in his 15 minutes, in a game the Ws lost by 12. Mr. Potatohead had a +1, and no one else on the Warriors was positive. The weird thing is, this game wasn't a total plus-minus outlier. For the season (317 total minutes played) Udoh is currently sporting a gaudy +11.96 unadjusted net plus minus — best on the team. Still seems pretty fluky, especially given his mediocre scoring and poor rebounding, but maybe there's something to be said for being, you know, good at defense? What's interesting, anecdotally, is how Udoh's D seems to rub off. Somehow, everyone on the team looks more active and inspired defensively when Friday is on the floor. For that, a big Quadruple-U for you, Udoh. And many more, I hope.

OK, that's all for tonight. That wasn't quite as painful as I imagined. Let's focus on the positives and get these guys back on Thursday night.