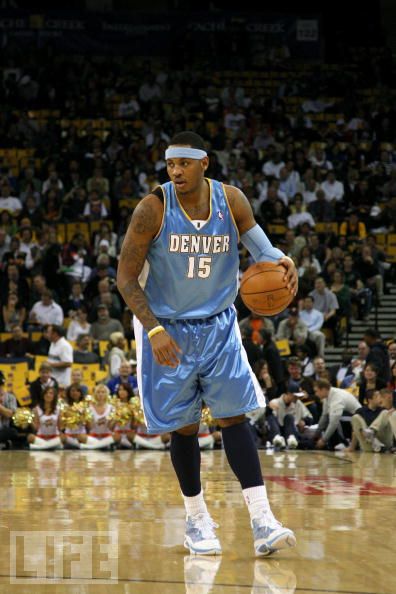 at the Oracle in Oakland

Forget Monday. It never happened. Look to the future. Just don't do it in the way that Denver and forward Carmelo Anthony have had to, wondering when he'll wind up where. The mammoth distraction that has been the Nuggets' star's career is not the sort of dreaming toward the future that Denver fans want.

Lost in the foregone conclusion that Anthony is headed to New Jersey, Chicago, New York, or LA is the fact that Denver is having another pretty good but not quite great year. Once again, they're scoring points with the best of them but don't really have the defensive firepower to challenge the elite teams. This bodes well for a high scoring affair where neither team does all that much to slow the competition.

More after the jump.

The Nuggets are also among the league leaders in players who can be widely and easily identified with a single first name. And they're a productive bunch In addition to the high scoring 'Melo, Nene is having an amazing offensive year, seemingly able to score 18 points without taking any shots (I kid, but the 0.692 TS% may well be "off the charts" if you're limited to 8.5 by 11). And the league's only Chauncey is having another very good season.

Everyone is looking to score and they manage to do so more often than not. The Nuggets will get their points, but the matchup does present opportunities for the Warriors on the glass. As potent as Nene has been scoring in the post, he's been more than underwhelming rebounding the ball. With 'Melo and Al Harrington rounding out the Nuggets' rebounding force, such that it is, the Warriors may well be able to compete on the glass for a change. Though they are right about average on the defensive boards, Denver is among the bottom three in the league in offensive rebounding percentage. Of course, who needs offensive rebounds when you've already made the bucket, like Denver so often does. Still, it's an opportunity, if, by some chance, Biedrins can stay out of foul trouble, Lee can show more of his NY self on the glass and someone, anyone else sees shots off the rim as opportunities.

As a complete, after 50 games, at 21 Wins-29 losses, the 1998-99 Warriors were one game worse in the win column than our 2010-11 edition. That lockout shortened year actually saw the Warriors in the playoff hunt for most the bizarre season. John Starks led all Warriors with 13.8 ppg and 4.7 apg. Seriously, those were the best averages on the team that year. For those of you living in a fantasy world, and as Warriors fans, it's probably a reasonable place to stay given the last couple decades minus the rare season, you can imagine that game #51 is actually the first game of the post-season, as it have to have been in 98-99.