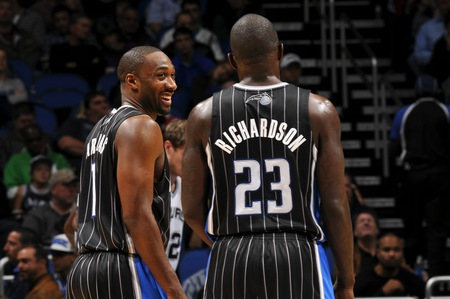 That was one of the easiest road trips the Warriors have had all season - 6 of 7 teams with records of .500 or worse - and they completely flopped. 2 wins, 5 losses. They beat the worst team in the league and the second worst team in the league. And they lost to the Nets who just flew back from London and were without Deron Williams.

Well at least they're home and can sleep in their own beds, not hotel rooms.

So what should we expect as our heroes return home to face the Magic?

There's 2 things that could happen. The Warriors surprise us all with a close win or they get completely and utterly destroyed.

A win after such a horrible road trip? Yup. This team is a completely different team at home versus the road. They've beaten some pretty good teams at home. Overall, they're 19-13 at home. They match up decently at all but one position, center, where Duh-wight Howard will destroy whatever tall person the Warriors put in there.

If Monta Ellis can shoot like he did against Boston, if Stephen Curry can have a big game, and if Reggie Williams is allowed to play more than a few minutes, the Warriors might be able to outscore the Magic. Lord knows they're not going to out-defend anyone.

But the result I'm leaning towards is the blowout version.