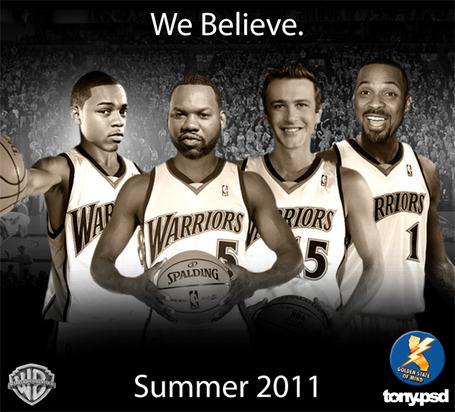 I'm a big fan of Warriors - Mavs match ups. It's a see-saw battle in which we win some and lose some. (the same goes for the Mavs) As I look back at the good times we had during our rare play-off push, I'd love to see a "We Believe" movie pitting our 1 hit wonder Golden State Warriors vs. The consistently hot Dallas Mavericks. They've always been a consistent force in the West but for us Warrior fans, we will always have our playoff upset against them back in 07'.

I will be at the game tonight. Every season I try and catch one Mavs game when they're in town. I enjoy that popcorn filled entertainment the Warriors (usually) bring when big name teams come to town.

How about them Warriors by the way? Talk about inconsistent!

Hit Jump for a quick preview to tonights game.

When The Orlando Magic came to town last Friday, Golden State put on a show! 3-pointers rained left and right, We gave them mismatch problems and our bench looked legit! That's the Warrior team we all love to see. Sunday rolled by and the Timberwolves came to town… we came through with the win and ended Kevin Love's 53 game double-double streak! So we head to Sacramento to face off against the Kings… WHAT HAPPENED?! We truly are an inconsistent bunch. You can see it in our record, the players stats, Coach Smart's rotation. We're 60+ games into the season and he's still looking for a consistent line up. It's time to shake things up in Golden State.

The Mavs are in town.

They just lost to Portland last night so they've got to be tired, (or pissed off) this is not going to be an easy task. Kidd, Nowitzky, Terry, Marion, a deep bench and a 47-20 record… The Mavs are coming to play! Dirk had one helluva night with 28 points against the TrailBlazers and Jason Kidd continues to feed his teams with assists after assists. In a nutshell, Dallas has a supporting cast I'd love to see in Golden State.

• We need a strong breakout night from our mighty 4 (Ellis, Curry, Wright and Lee)

• Bench production: Ugh, who's it gonna be that helps out?! I got my money on Udoh, Amundson and Williams.

• "Turn off the Acie!" Less minutes for Acie Law and Andris Biedrins. Give the minutes to Amundson and Radman,
gave up on Acie and Andris.

• Honestly, I just want to see a repeat performance from Fridays Orlando game! Show us what you git Warriors!

I want to live dangerously tonight, should I…