McCovey Chronicles has been doing Community Projects for the past few seasons, mainly involving the organizational prospects. I'd like to introduce it to here with every draft from now on. I have compiled a list of the 30 top prospects from Draft Express and we can add to it as we see fit further along the road. March Madness has just started and many of the domestic prospects will be on display. I will list the important dates of the Dance and of the Draft, followed by the current bracket, and draft list.  Any member can pick up up to 2 prospects and make your own draft post on them, from what you've read and heard as well as your own observations. 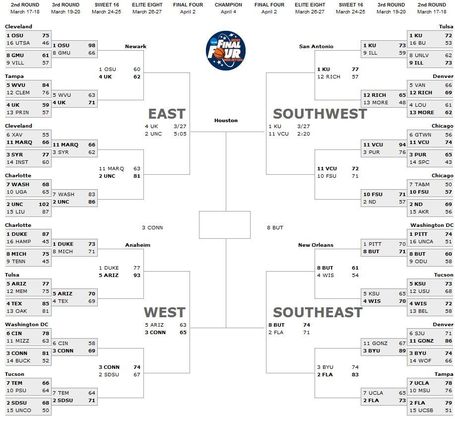 All that I request in your scouting report(s) are that you keep it formatted and well or adequately written as well as providing real statistics/data (ie no fake/made-up stats). Here is a preliminary draft scouting report: 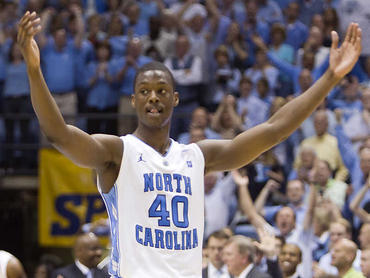 Oh yes, a Heel, how surprising huh? Barnes came into this season as a projected superstar, however, the hype has not matched what he had to show for this season and I will be the first to say it, I was disappointed in his play...until now. The Heels at some points of the season looked as if they shouldn't have even been ranked at all, and when they were ranked, it seemed they were only ranked because of our name. Woe was us, but we finally got hot mid-season to now with the help of Barnes and fellow freshman Kendall Marshall. Barnes although raw, is very mature for his age, has shown leadership, and is a devout worker. He is apt on both sides of the ball, showing brilliance on offense occasionally, and showing above average D on the other side of the ball. A stat that many people here would like is him in the clutch, he has 5 game winning shots, with the last coming on a 3 against the FSU Seminoles.

On Offense: What Barnes lacks in elite-level athleticism he makes up for with offensive polish, savvy and scoring instincts...With his excellent footwork, array of step-back moves, and ability to just throw the ball in the basket, Barnes is capable of making some incredibly difficult shots. Unfortunately he relies on this part of his game too heavily, placing him just 74th of the 83 NCAA prospects in our Top 100 rankings in True Shooting Percentage....Barnes ranks as one of the 35 best off the dribble shooters in the NCAA (min. 75 possessions) according to Synergy Sports Technology, converting 39 of 99 (39%) attempts this season. He elevates impressively with picture perfect mechanics and a beautiful follow through, showing deep range and outstanding touch...Barnes' accuracy falls off quite a bit in catch and shoot situations (35/115 [30%]), particularly when closely guarded...While Barnes' inability to consistently make shots with his feet set has hampered his shooting percentages this season, the more concerning aspect of his play has been his struggles scoring efficiently inside the arc.......Barnes is converting a lackluster 47% of his 2-point attempts, while getting to the free throw line just 4.3 times per-40 minute pace adjusted. By historic standards, both of these figures do not measure up particularly well compared with collegiate wing players in the past......Barnes does not possess a great first step, nor is he a very creative ball-handler or passer at this stage. He's not particularly effective in transition or isolation situations, as he doesn't show the ability to change speeds or use advanced moves to get by his man......Barnes has such great confidence in his ability to make shots off the dribble that he tends to settle too quickly for his pull-up jumper, a shot that classifies as a low-percentage possession even for the best scorers. He can make these at a solid 40% clip, and probably will continue to do so in the NBA, but he will not be a particularly efficient offensive player until he diversifies his slashing game and learns how to get inside the paint and draw fouls at a higher rate.....The fact that he's been unable to do so at the collegiate level is somewhat concerning, and is something NBA teams will need to study in order to evaluate how much he can improve in this area down the road.

On Defense: Barnes possesses ideal physical tools on this end of the floor, with his excellent size, frame and wingspan. He plays with great intensity but is also very fundamentally sound, getting low in his stance and moving his feet extremely well, usually leaving himself just enough cushion to contest his opponent's shot while still being ready to slide in any direction. Although he doesn't collect a great deal of blocks, steals, or rebounds, he's an extremely effective defender who likely be capable of guarding either wing position at the NBA level, which gives the team that picks him nice versatility to work with.


On Intangibles: Despite being just 18 years old, Barnes already plays with a tremendous amount of savvy, something that leaves great optimism regarding his future. He's a team player who displays an ideal temperament out on the floor, never getting too high or low in any given moment, and always playing with great self-confidence.

Anyone that has been around him states emphatically that his character is of the highest standard, and whoever drafts him can be fairly certain that he will represent them extremely well on and off the court. Despite the shortcomings mentioned, there is very little doubt that he will continue to work diligently on improving the weaker points of his game once he reaches the NBA. Considering his age, it's not a stretch to say that he still has plenty of room to grow as a player.