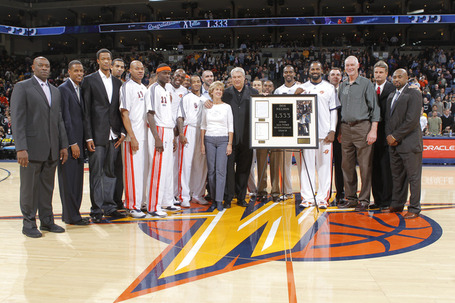 A: Well a lot of things, but tonight's edition of Chronicle Live on CSN Bay Area hosted by the legendary Greg Papa featuring a live full hour interview of the NBA's all-time winningest head coach Don Nelson is definitely on that list.

Thanks to Jay dela Cruz from CSN Bay Area for forwarding us the press release:

In 14 seasons as an NBA player, Nelson averaged 10.3 points and 4.9 rebounds per game in 1,053 contests. He was drafted in 1962 by the Chicago Zephyrs (19th overall) and spent one season with the team before he was picked up by the Los Angeles Lakers. After two seasons in Los Angeles, he was signed as a free agent by the Boston Celtics in October 1965, where he played for 11 seasons. During his time with the Celtics, he was a member of five NBA Championship teams (1966, 1968, 1969, 1974, and 1976). His #19 uniform was retired and raised to the Boston Garden rafters in 1978, honoring him as one of basketball’s greatest "sixth men."