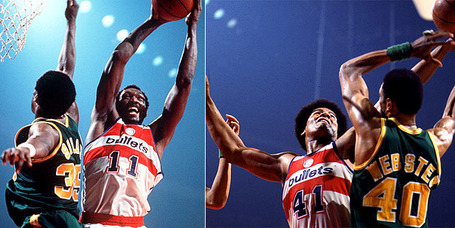 Try one. Yep, this once-proud franchise limps into tonight's Clash of the Titans at the Oracle with a 1-34 road record.

If the very young Sleepy, who in '78-79 was captivated by the ultra-cool Hayes/Unseld/Dandridge Bullets that made it two straight NBA finals (winning one), could have foreseen this lame, gold-lamé-clad bunch of "Wizards," he would have been quite bummed. Good thing he quickly jumped off the Bullets bandwagon and eventually adopted the world-beating Warriors.

I'm not one for brash predictions, but as a fan of a once-proud, marginally less pathetic team, I'll take brashness where I can get it: the Warriors, fresh off a Nellieball-style trouncing of the Craptors, win this one running away.

Can You Get to That by Funkadelic, from Maggot Brain (1971)

You Got the Love by Rufus (with of course the sublime Chaka Khan), from Rags to Rufus (1974)