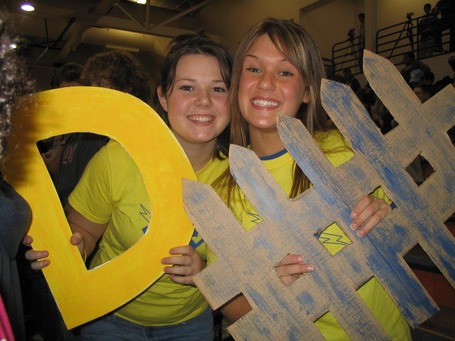 Are these girls looking for Curry?

Final Boxscore | Preview/ GameThread (1090+ comments) | Game Day Links
SB Nation: Bullets Forever
So before this game I was feeling, um... uninspired. I really wasn't feeling up to watching these same old Dubs the same old way I have so many times before, and since I knew that I couldn't change anything about the team, I figured I'd have to change the way I watch. A drinking game you ask? Actually no, but I wish I would have thought of that before the game (DANG). It would have made for a much more interesting recap. No, I decided to watch the game pretty much the opposite of how it comes naturally to me. I would focus on the Warriors defense and try not to get too excited about anything that happened on offense. Say it with me "DE-FENSE!! DE-FENSE!!"

So it's kind of a funny thing, but even though we should all be able to agree that defense is half of the game, we really don't spend much time talking about it around here. I mean, sure, it's not like we ignore it completely, but for every paragraph breaking down something on the defensive side of the ball you could probably fill volumes with talk of offensive efficiency and rebound rates. I guess it's kind of hard when we might not always understand the finer points of the teams defensive schemes, and what is expected from the players in certain situations, and we don't have many reliable metrics to measure a players contribution on that side of the ball to back up our observations.

Lately I've been increasingly bothered by the lack of effort from some of our guys to do the simple things on defense. The one thing that's been driving me nuts is that some of these guys don't put in the effort to contest shots consistently. I've seen Lee close out on a big at the elbow extended, and then when he gets there he'll let his weight sit back on his heels and extend one hand at his man's chest or waist as he shoots over him. What the heck? Stay on your toes and rise up to bother that shot a bit. It's not like he should be trying to block jumpers, but pressuring a shot makes a difference... right? It's such a simple and fundamental part of defense, so why will our guards fight around a screen and then let their arms hang at their sides while they watch the offensive player pull up.

So, I figured this would be a good place to start. Tonight I would take notes, and log who is contesting shots well, and who's not, and which shots go in. Then we can look at it and see if it tells us anything. I'll tell you something up front, it was eye opening for me.

Okay, I guess I should explain how I decided to do this real quick. Every time the Wiz would attempt a shot, I'd look at how the shot was contested and fit it into one of three categories:

Here's how the totals broke down. Over the course of the game the Warriors cleanly contested 56 shots. Of those shots that they properly contested the Wizards made only 16. That's only 28.5% shooting when the Warriors made sure that the Wizards shooters were closely defended. That should basically tell us the obvious, that playing better defense matters.

The Warriors fouled 15 times while closely contesting shots. Without more context I don't have much more to say about this total, but I know that it's very frustrating to see the team play good defense right up until the last moment and then send the Wizards to the line. Sometimes the fouls were from over aggressiveness, or from being out of position at some point in the defensive possession, and other times they were innocent enough. Either way, these hurt because they are all shooting fouls and end with free throws for the other team. If I do this often enough I'd like to see who can consistently score in the first category while limiting these fouls.

Sadly there were 27 Wizards shots that I deemed were not well contested. Of those they made 18 or them for 66.7% shooting. Now these weren't all due to laziness, because this category also includes some fast break buckets off turnovers, and a couple offensive rebounds where nobody was in position to challenge the shot, but it was actually surprising how many of them were from late closeouts, slow switching, and guys just not putting their hands up when they were in position to.

So before I dump my notes on you to peruse let me give you a couple highlights...

Here are my rough notes. Feel free to dig in and see if there is anything interesting in there.

Looking at it chronologically like this again, it reminds me that you could really feel the defensive intensity pick up for those stretches in the second and third quarters when they built the lead, and again late in the game when it seemed like Udoh was defending the whole team by himself trying to save what little was left of the lead. Speaking of which...

Time to put my money where my mouth is and ignore Steph Curry's incredibly sexy line of 29pts on 18 shots with 5 assists and 9 rebounds, in favor of Udoh's 6pts 2reb 3blks 2tov... You know why? Because defense matters, and it's about time we started paying attention to who is really helping on that end of the floor. Great job by the rookie in his first start.