GameThread #76: Golden State Warriors @ Memphis Grizzlies - Is This What We Have to Look Forward To?

Share All sharing options for: GameThread #76: Golden State Warriors @ Memphis Grizzlies - Is This What We Have to Look Forward To? 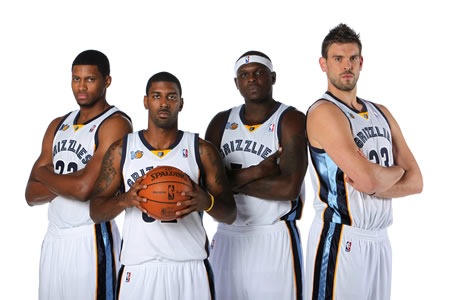 (via www.greatnba.com) How far can this group really take you?

So as the season winds down it's looking more and more likely that the Grizzlies will earn the honor of facing off against the Spurs or Lakers in the first round of the 2011 NBA Playoffs. With many of their eggs already residing in baskets belonging to Rudy Gay, and Mike Conley (about $127 million worth of eggs over the next few years) the Grizzlies will need to decide whether or not they want to fully commit to a core of Gay, Conley, Mayo, Marc Gasol, and Zach Randolph this offseason, when the two bigmen's contracts are up. Now, I'm sure Grizzlies fans are just as excited about getting a taste of the postseason as we were back in '07, but you have to wonder if going all-in on what looks to be a perennial contender for the 8th seed is a sound strategy for a franchise. Are you listening Mr. Lacob?

None of us can really be sure what Joe Lacob and co actually have planned for this offseason, but if you take them at their word, it looks like they plan to build around the existing core. All signs are pointing to a new coach, and likely an acquisition of another center. It's become quite the cliche to hear fans (especially the true believers), and management throw around the idea that this (or any) team is "one good player away" from... something. Some will say becoming a legitimate playoff team, others would say title contender. I'm sure most of this depends on what your definition of a good player is. For this discussion, let's say that a good player would be whoever we can realistically find in the offseason. Giving management the benefit of the doubt (ignoring the specifics of how), and hoping they can meet the goals they've set out in the media, let's imagine that they are able to acquire someone like DeAndre Jordan, Marc Gasol, Yao Ming, Tyson Chandler, Nene, or Greg Oden (all good players, and just some of the names that have been tossed around in the media and among fans as possible targets in the coming offseason). Well, if that's the definition of a successful offseason, then I'd have to say that it looks like we are about one good player away from being...

Is that really the plan here? Long term commitments to Curry, Monta, Lee, and a possible free agent center? How far can you get you get in a league of superstars when you don't have one? Hey, look, as nice as it would be to be in the hunt for a 7th or 8th spot in the Playoffs, I think building around this group would be putting the cart before the horse. You know, horse as in stud - stud as in elite NBA player. Until we can get our hands on one of these guys, the goal of this front office should be to get as young and cheap as possible.

When it comes to the franchise/fan relationship, the only thing worse than being sold on upside during a few losing season, is being told that the team really isn't as bad as they look and that they are only "one good player away."