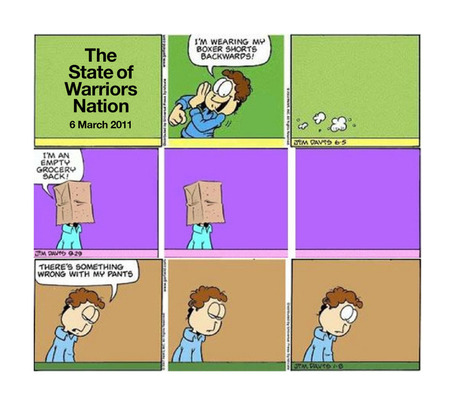 Since I used the hilariously nihilistic "Garfield Minus Garfield" to express the quixotic (Arbuckle-ian?) plight of the 76ers in their 2010-11 preseason preview, I thought it was only sporting to apply it here to the current state of our Warriors. Indeed, these days, if anything, the backwards boxers and empty grocery sack seem more applicable to the Warriors than to the 76ers, who have ridden an impressive 11-4 streak to within a half game back of the "revamped" New York Knickerbockers for the #6 seed in the Eastern Conference. Meanwhile, for the Warriors, it continues to be roughly 2.7 steps forward and 3.4 steps back. Make the jump for some nihilism and self-loathing. Plus ... you know, the game thread!!!

Looking back at the 76ers preview, it appears — whaddayaknow — I got a few things right and few wrong. In the reasons to be cheerful section: Iguodala remains the team's leader and best player. He hasn't improved his scoring efficiency as I expected (his ts% is currently .535, same as last season), but he's been a beastly all-around force: 6.0 rebounds, 6.2 assists (to a paltry 1.8 turnovers) and 1.6 steals in 37 mpg, together with the usual long, strong, physical defense. For those who care about arbitrary round number thresholds: he's notched two triple doubles in his last six games. Not that bringing him to the Ws was ever a realistic possibilty, but anyone who still doesn't think he'd represent a substantial upgrade at SG over Monta Ellis ... well, I disagree strongly. Even given his mediocre shooting stroke, he's a better all-around player right now than anyone on the Warriors.

As for the supporting cast ... well, as I expected, Jrue Holiday continues to blossom into a legit NBA point guard. His 6.4 assists per 36 is the best among his contemporaries from the PG-rich 2009 draft. (Though I'd still argue that Curry is by far the best all-around player of the bunch, non-Griffin division). I missed on Turner — comparisons to a young Roy still seem wildly misplaced — but after an awful start he seems to have settled down a bit. He certainly doesn't obviate the monster that is Iguodala, but at least he's rebounding well and taking care of the ball.

And speaking of improvement: even Spencer Hawes, while he remains a nightmare of offensive efficiency, is averaging a respectable 10.1 boards and 1.6 blocks per 36.

Dang, why can't get players who vastly outperform their expected production? Heck, if Biedrins and Lee were anywhere near their career numbers, we might well be looking at a #6 seed instead of a 27-34, with backwards boxers, an empty grocery sack, and something wrong with our pants.

• In the battle of overpaid former all-stars, Lee and Brand play to a standstill.

• Warriors win, just to mess with our draft position.

What is wrong with Jon Arbuckle's pants?