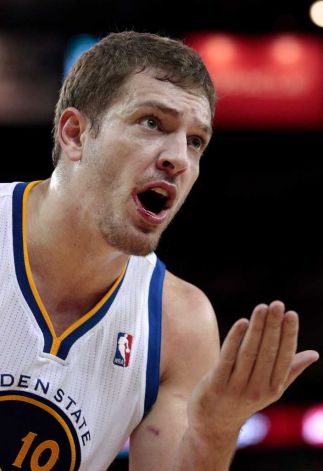 David Lee, pictured moments after finally being overcome by his thirst for human flesh. Lee was unavailable for comment as to whether the disease contracted from Wilson Chandler was slowly turning him into a Zombie or a Vampire. In an unrelated story, Oracle arena will no longer be serving Garlic Fries.

So after winning three games in a row against the Mavs, Blazers, and Lakers in impressive fashion, the Warriors came out last night and reminded us that having a roster full of pretty good, pretty young players who can compete with some of the best in the league doesn't actually make them special. This is the NBA, and in the NBA even the bad teams are talented. So let's make no mistake about it, the Warriors might not be among the worst in the league, but they are still a bad team.

Look, I'm not trying to ruin everyone's fun here. I really enjoyed beating some good teams down the stretch, but isn't this routine getting old? How many times have we seen this team play mediocre basketball all season, and end with a stretch of good play against good teams that leaves us all wondering what would happen if they could just put it all together next year? Sure, with some improvements and a little luck, we could see this team in the playoffs next season for only the second time since radios were playing Lisa Loeb's hit single "Stay." Oh, you don't remember that one... How about Ace of Base with "The Sign", "All That She Wants", and "Don't Turn Around" (all of which are now stuck in my head, thanks). I guess I should be happy with that, but after all the years of watching this franchise drift around like a rudderless ship I suppose I'm looking for more than the prospect of finishing above .500 and sneaking into the playoffs with little or no upside on the roster and in all likelihood a CBA that makes it harder for a capped team to go out and get better.

It all became so clear last night when Fitz exclaimed something about how the Warriors are 32-30 when the "big three" (lower case for emphasis) are all healthy. Is that really something to be excited about? I want some real hope. I want to see this franchise torn down to the studs and rebuilt around a cohesive strategy laid out by basketball mind capable of building a winner.

But hey, none of this is really the fault of the players. They are who they are, and outside of a lull after the All-Star break, I think they've been doing their best. It's been refreshing to see them come out and play consistently hard against some of the better teams in the league.

My son turned five on the day of the Lakers game, so I figured it would be a fun treat for him to go out to a game on a school night and hopefully start to discover what it is that his dad loves so much about this game. As we are pulling into the parking lot I realized that I haven't actually been to a Warriors/Lakers game before. It was a completely different environment than the Oracle I'm used to. It had been overrun by former Angelenos and unapologetic front runners. I suddenly got concerned about my son's developing fanhood. I was flashing forward to the end of the night when my son would ask me why we root for the team that just lost by 30 when all those people in purple and gold looked so much happier than we were. How was I going to explain this? Was I unintentionally delivering my son into the hands of a franchise that I despise? Let's just say as the game started I was hoping for one last miracle this season.

Lucky for myself, my son, and the general interest of future peace in our household, the Warriors played with heart and pulled out a huge win at home against the champs. The two of us were all smiles, and I don't think my son will be trading in his Curry jersey for a Kobe one anytime soon.

These are exactly the type of exciting games that keep us coming back as Warriors fans. The problem is that playoff atmosphere does not equal playoff games, and even a victory against the best in the league can only be a moral victory when you've already been mathematically eliminated from the playoffs. It's kinda sad that we've grown so accustomed to mediocrity that win number 35 with three games to go can feel like it matters. Unlike TNT, Warriors fans no longer know drama. Sure we might be taking this team seriously, but to everyone else in the league it more closely resembles Thursday night on NBC.

Keep your head up Monta Ellis

I don't want to dwell on this too much, but I have to say that when I saw Monta go down hard at the end of the Kings game, I couldn't help but think about how much I appreciate the way he puts it all out on the line every night. He's a tough player with a lot of heart and determination. He's proved people wrong time and time again in his career already, and I think it would have meant a lot for him to play in all 82 this season. I'm sad for him that he won't be able to. Monta Ellis may not be able to lead a team to the playoffs, but it wasn't for lack of trying. He played long minutes every night, and did the best he could when his coach handed him the keys and said "Go do you." I still don't think it's the right move to build this team around Monta, but that doesn't mean I don't respect the man.

Games have been played... let's hand out some hardware!

For his 22pts 17reb 5ast 4stl in the Lakers game, and his tough defense on DeMarcus Cousins' elbow in the Kings game. Lee might have looked like a bit of a disappointment for much of the season, but he's starting to look a lot more like the player the Warriors ponied up big dollars for.

His 27pts 8ast and 6reb helped him to stand out in the game against the Kings. If only that last shot was a four pointer...