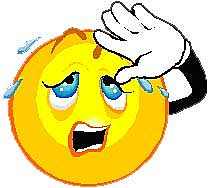 Whew! What an opening weekend!

Usually in the 1st round of the playoffs, there are some good series and also some boring series that just make you twiddle your thumbs waiting for the 2nd round. Not this opening weekend! Whoo boy! Every game was close and undecided in the 4th qtr. And nearly every game went down to the final minute. There were intense dogfights everywhere with several unexpected upsets. Whew! And it's only GAME ONE!!! Let's first take a look back at opening weekend before we move ahead with today's games.

On Day 1, the Pacers led most of the way, but led by Derrick Rose, the Bulls went on a closing run to steal the game. The Hawks disrupted the Magic offense by letting Howard go off in the 1st half, then frustrated Howard into foul trouble and came away with the upset of the day. The Heat looked like they were going to pull away, but the Sixers pulled the Heat right back in. But some Dwyane Wade heroics kept the Heat away from that 5 letter u-word. Neither the Blazers nor the Mavericks led by more than 10, and it took some Dirk Nowitzki takeover mode along with a dagger Kidd 3 to finish off the Blazers.

On Day 2, the Ginobili-less Spurs looked like they would close out the game with their usual end of game poise, but a Shane Battier clutch 3 put the Grizzlies up by 1 to give the Grizzlies their first franchise playoff win and avoid that c-word ("collapse").

The Lakers tend to sleepwalk through the first half and turn it on in the 3rd, which is what they did, but the Hornets turned it back off in the 4th with CP3 owning the game with some tough shots over Gasol and Fisher.

Likewise, the Knicks owned the Celtics in the first half, but the Celtics turned up the intensity in the 3rd to tie the game. Late in a game, Chauncey Billups injured his left knee and was taken out of the game. Although a Toney Douglas 3 gave the Knicks a 3 pt lead, the composed Celtics answered with an inbounds KG dunk and later a Ray Allen 3 to lead by 2. Without their floor general, the Knicks didn't know what to do, and a bad Carmelo 3pt attempt sealed the win for the Celtics.

The final game of the day started out with a burst from the Nuggets who could not miss, but turned into a tug of war with highlight plays from both sides. Just when it looked like the Thunder would win with an 8 pt lead, the Nuggets storm right back with a 9-0 run to lead by 1. Then the Thunder was gifted with a basket that should have been offensive goaltending, and they hung on to edge out the Nuggets.

Are you out of breath yet? I sure am. And there are more games coming too! 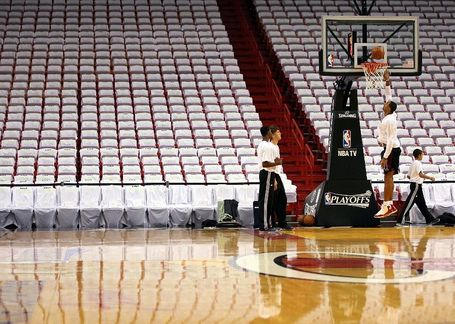 I'm getting dizzy just looking at all that white.

Dwyane Wade missed Sunday practice due to migraine headaches that make him sensitive to light. But he was back during morning shootaround this morning with some tinted goggles. His teammates have nicknamed him "Blade". Wade is supposed to be good to go for tonight, but no word on whether he'll wear the tinted goggles during the game. However, I read that the Heat's PR department is going to give everyone white T-shirts to wear again, and every seat is still covered in white cloth. This is supposed to represent "White Hot Heat". That could be too white hot for Wade's eyes and migraines.

He can lead the team, close the game, and create more Funleavy Fotos. 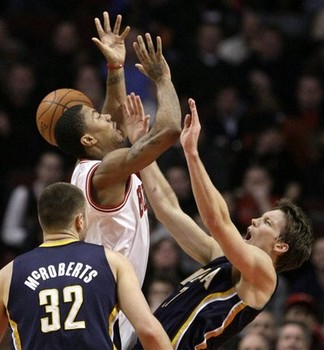 Here's one from earlier in the season to add to the collection.

This series was also supposed to be a no-brainer. And it may yet turn out that way. But for now, the Bulls got a good wake-up call in Game 1. To quote Charles Barkley from last night, has anyone seen Carlos Boozer?