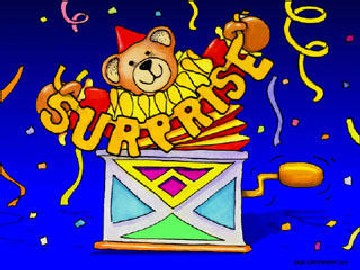 Surprise! We got quite a few surprises over the weekend, and more may come tonight.

It was going to be hard to top Saturday's basketball action where all four games went down to the final minute, including an epic 23pt comeback led by a bench guy with knee trouble named Brandon Roy. Sunday's games didn't quite top Saturday's games, but they turned up some dramatic surprises.

The day started in Philadelphia, where the Sixers started out hot and jumped out to a 16pt lead. Then the Heat woke up and erased that away. With a 6pt lead for the Heat and about 1:30 to go in the game, it looked like the Heat would complete the sweep. But an Evan Turner jumper and a Jrue Holiday 3pt brought the Sixers right back to within 1. Then Lou Williams nailed a 3 from the top and surprise! The Sixers took the lead away from the Heat and eventually took the game.

Down in Atlanta, the Magic showed us how to "die by the 3". They hit their first 3pt, and then missed their next eighteen 3pt attempts until Gilbert Arenas hit their 2nd and last made 3pt of the game early in the 4th qtr. Maybe the Hawks were doing something to disrupt the Magic's 3pt shooting, such as not double teaming Howard, so defenders are closer to the 3pt shooters. Despite the struggles, and with a nice burst from Gilbert Arenas in the 4th qtr, the Magic were right there with the Hawks at the end of the game. On the Magic's final play, Al Horford disrupted Hedo Turkoglu into losing the ball momentarily, and forced Hedo into a tough 3pt miss at the buzzer, and surprise! The Hawks hung on to win and lead the Magic 3-1.

Finally in New Orleans, Chris Paul showed why he's a great player. Despite starting the game with a jammed left thumb and then receiving an elbow to the left eye during a jump ball, Chris Paul found ways to lead his team to victory. He fought for several 50-50 rebounds, abused Andrew Bynum twice on a switch, and dished off to teammates most of the night. The biggest play came in the final minute when CP3 drove to the basket, got caught in the air, saw Jarrett Jack cutting into the paint from the other side, and dished it to Jack before landing, who hits a fadeaway shot to push the lead to 4pts and a 2 possession game, and surprise! The Hornets tied the series with the Lakers.

So how did you like those surprises? Jump inside to see what more surprises are in store tonight. 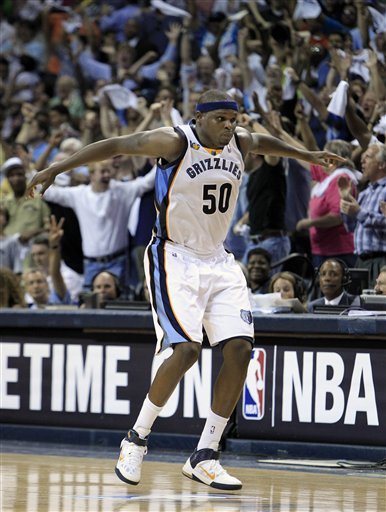 Tim Duncan isn't the only guy who can hit a surprise clutch 3 in the playoffs.

With nothing going on the play, Zach Randolph launched AND HIT a 3 to push the Grizzlies lead to 5 with under a minute to go. Surprise! Furthermore, the Spurs failed to execute on their final play and could not get off a shot to lose the game. Double surprise! Just as the Warriors "shocked the world" by taking Game 4 from the Mavericks, the Grizzlies can do the same here against the Spurs. 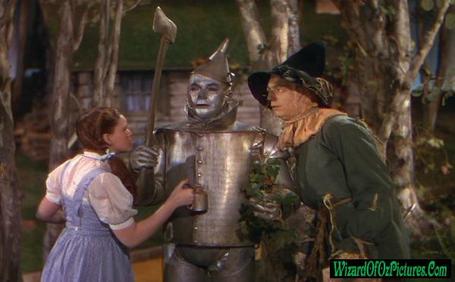 The Wizard of Oz's Tin Man was out in search of a heart.

If you have the heart of a champion, you absolutely, positively, without a doubt CANNOT give up a 23pt lead late in the 3rd qtr and lose the game. Perhaps they aren't the Dallas Mavericks, but the Dallas Tin Men. The surprise tonight might be that the Mavericks don't recover from the loss and the Blazers take a game on the road. 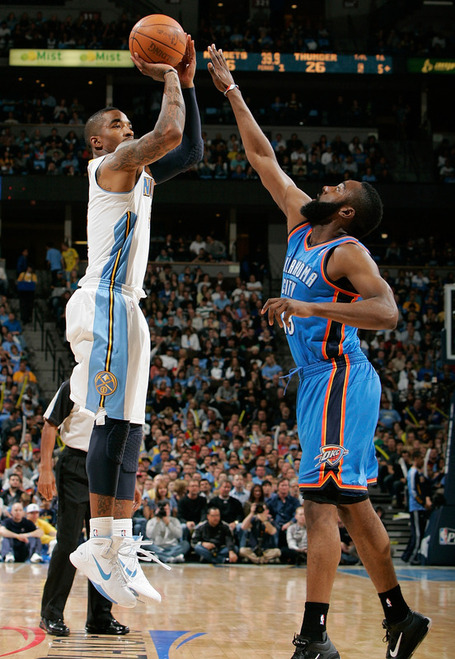 At least the Nuggets have their "crazy guy" role filled.

JR Smith is crazy and streaky enough to be that guy. And he did his best to try to save the Nuggets from losing Game 3 with 2 big 3s from the corner in the final minute. But alas, JR Smith isn't crazy or talented enough to be the guy the Nuggets go to when they need to score. I'm going to predict a Nuggets let down, and the Thunder wrap up this series tonight. No surprises here.