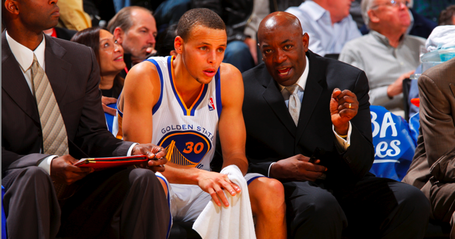 Thanks for the memories, Coach Smart.

Keith Smart will not be back as Warriors coach.

The Warriors will not pick up their team option on his contract for the 2011-12 season, Comcast SportsNet Bay Area has learned from sources.

Read more: Warriors won't retain Smart as coach
Tune to SportsNet Central at 6, 10:30 and midnight on Comcast SportsNet Bay Area for more on this story

Props to beloved GSoMer J-Ridah for the timely fanshot, and for kinda sorta breaking the story on GSoM days ago.

More to come ... including presumably the announcement of a successor. For now: answer the poll and discuss.

UPDATE: some bittersweet details from the great Marcus Thompson II.

Smart said the end is tough because, unlike previous stops, he "had a chance to grow roots" in the Bay Area.

He said he is hoping to land another head coaching job. He said he will be on a bench next season, even if that means taking a job as an assistant.

"It's never easy to make difficult decisions, especially when it involves someone that we have a great deal of respect for like Keith Smart," co-owner Joe Lacob said in a press release. "I think Keith did an admirable job this season and he should be commended for many of the positive things that transpired both on and off the floor. The team showed improvement and their effort was never in question. However, we've elected to pursue a new path."