And Then There Were Eight. MEM at OKC, BOS at MIA :: NBA Playoffs Day 16

Share All sharing options for: And Then There Were Eight. MEM at OKC, BOS at MIA :: NBA Playoffs Day 16 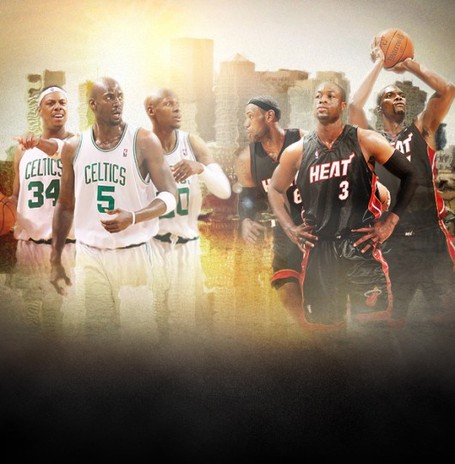 This one could get interesting.

Onto the second round. Today's twin bill features the Matchup David Stern Has Been Dreaming About (though I suppose ideally he would have had it happen in the Eastern Conference Finals); and on the "undercard," a Small Market Smackdown between Volunteer and Sooner states. Some brief thoughts after the jump.

OK, call me David Stern's willing idiot, but I'm pretty excited for Heat/Celtics. Neither team was particularly challenged in Round One; expect that to change here. Overall, I have to say I was more impressed with the Heat's showing v. Philly than the Celtics' effort vs. the Knicks. Outside of one plucky run by the Sixers at the end of Game 4 to avoid a sweep, the Heat looked comfortably in cruise control throughout the series. I still think they're a sleeping juggernaut waiting to put it all together; their #3 and #6 are just too comparable to the Bulls' #23 and #33 for me to think otherwise.

As for the Celtics: don't let the sweep fool you into imagining that this is the '07/08 Mean Green Machine back to clicking on all cylinders. They caught a couple of big breaks with the series-ending injury to Billups, Amare's back spasms, and the two squeakers that tilted their way in Game 1 and 2. Sans Billups the Knicks were probably the weakest and shallowest of the sixteen playoff teams, and the Cs managed one really impressive performance against them, in game three. The absence of a credible big man to complement KG remains an issue for them. Jermaine O'Neal showed a couple of flashes of his old self v. NY, but then it helps that he's three inches taller than anyone on the Knicks roster. Shaq's return remains a possibility, but well see what kind of playing shape he's in at age 39 and 350-ish lbs, after missing close to 30 games with Achilles issues. If neither of the O'Neal twins brings much in the playoffs, trading away Kendrick will look like a serious blunder. On the other hand, Jeff Green, at least on paper, may be the only guy on the Cs roster who matches up physically with LeBron James. If he can help Pierce keep LeBron in check, and the Cs pull out the series, Ainge's gamble looks significantly less crazy.

As for the "undercard:" well, it's really an undercard in terms of market size only. Anyone who watched the Thunder and Grizzlies' first round series saw two very impressive teams: young, deep, smart, athletic, hungry, inspired to play defense. The Grizz really opened my eyes. Every time it looked like the Spurs might gain some momentum, they seemed to able to draw on some previously-undiscovered well of savvy, veteran, aggressive basketball. Zach Randolph in particular was a revelation. As a Warriors fan, I was struck by the parallels between '10/11 Z-Bo and '06/07 B-Diddy — the two absurdly talented but often erratic star players who suddenly put it all together and put a team on their backs, virtually willing their teams to victory with their mad game and oversized hearts. It's hard to avoid the comparison, as the two first-round series unfolded in such similar fashion:

I remember watching a Warriors/Blazers in Randolph rookie year (’01-02) and being crestfallen to hear the great Jim Barnett say that Z-Bo — a 20 year old rook grabbed by the Blazers with the #19 pick — was a better player than anyone on the Warriors. Grudgingly, I had to admit he was right. His next 8-9 seasons may have been marred by injuries, inefficient play, and crappy teammates (sound familiar?); but as with Baron Davis, just before the clarion call of age 30, he was able to find just the right combo of talent, timing and teammates to carve out his own little place in NBA lore. Give it up for Z-Bo!!!

All that said: the Thunder remain my pick for NBA champs right now. They just dominated a tough, deep, talented Nuggets team. They have all the ingredients: length, athleticism, depth, and defensive chops, all built around an elite player who is unguardable when he gets it going. With Gay out, who on the Grizz has any hope of matching up with Durant? With all due respect to Manu Ginobili, I suspect Shane Battier, Tony Allen and Darrell Arthur will find their hands a lot fuller with the Thunder's lanky #35 than with the sublimely talented but 6'5" Ginobili.