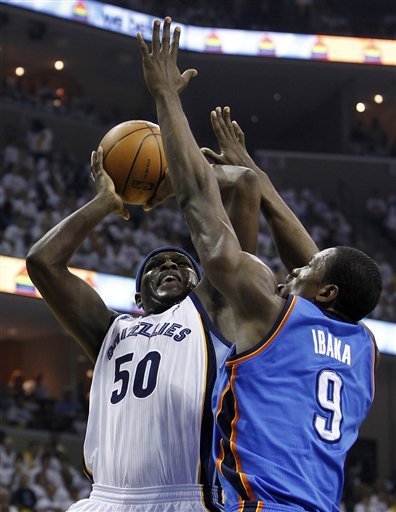 When James Harden hit that 3 near the end of the 1st half to push the Thunder lead up to 13, we all let out a sigh and called it "game over". Sure, Shane Battier hit a buzzer beating 3 to make the deficit look nicer at 10, but that shouldn't matter. Game over, end of the Grizzlies' Cinderella story. Right?

Wrong. Why? Because after halftime, the Thunder, especially Kevin Durant, went ice cold, and the Grizzlies took advantage and mowed them down. First, the Grizzlies came out with a 11-2 spurt to pull within 1. Then Zach Randolph hit a couple of rainbow shots in his defenders' faces. Meanwhile Durant kept throwing up bricks. The end result was a 2nd half dominated by the Grizzlies: 53 pts vs 29 pts, a 22 pt swing from halftime. Who would have thought that Battier's 3 at the half would end up being the catalyst for the Grizzlies dominating comeback in the 2nd half?

The Grizzlies sent their fans home happy by staying alive, and gave us TV viewers something to be happy about: a Game 7 between these 2 teams. And you know who else is happy about the Grizzlies win? The Mavericks. They're sitting in Dallas, wringing their hands with glee. They love that the Grizzlies and Thunder are wearing each other out, so they can zip right through them in the 3rd round. 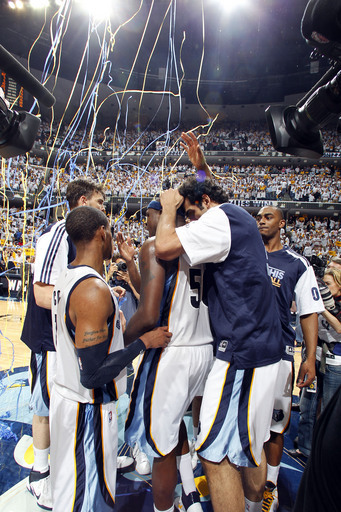 Will there be more Grizzlies celebration after this afternoon's game?

Two weeks ago, the Grizzlies defeated the Spurs in their own home on Friday, traveled to OKC, got up early for a Sunday early afternoon game, and stole Game 1 from the Thunder. The Grizzlies will need the same kind of focus, determination, and magic today as they face these same Thunder in OKC in another Sunday early afternoon game after beating them back at home on Friday to force Game 7. 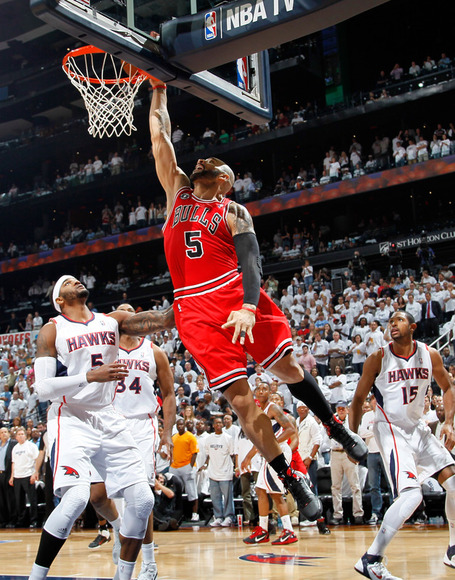 If the Bulls want to win, they need more of this.

Carlos Boozer has received a lot of support from his teammates as he tried to bust through his playoff slump and turf toe injury. Derrick Rose thinks Boozer is out of his slump after Thursday's game. Bulls fans NEED Boozer to be out of his slump, because I don't see how a 1 man team can beat a 3 man team.