This was the Bulls's key to stopping the Miami Heat.

How do you stop the Las Vegas favorites of the Bulls/Heat series? You bring in defense to suffocate the Heat and make them look silly, such as trapping Dwyane Wade in the air and intercepting his forced pass. You bring in the hustle to out-offensive rebound the Heat. And you bring in Taj Gibson to fire up the crowd, the TNT broadcasters, and the TV viewers: Youtube link: Taj Gibson in Game 1. When you put it all together, you get the Bulls taking control of the game of the 2nd half and a bunch of nervous bettors in Las Vegas.

To top it all off, that Heat/Bulls Game 1 was the highest rated NBA game in cable TV history. It beat out Michael Jordan's final All-Star game in 2003, the one where he made that fadeaway to take the lead in OT (Youtube link), which was ruined by a stupid Jermaine O'Neal foul. So you know you gotta watch the rest of this series, because everyone else is watching too.

Onward to tonight! The Thunder arrive in Dallas to challenge them in the Western Conference Finals. 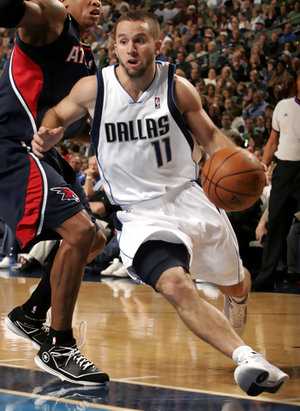 JJ Barea's dash of speed is just one of the Mavericks bench weapons the Thunder will have to contend with.

I don't think tonight's Thunder/Mavericks game will generate the same TV ratings as the Heat/Bulls game, but it's good to see some new teams and fresh storylines in the Conference Finals. Dallas has been here before, back in 2006, but the OKC Thunder is about as fresh as they come. They did well to stay poised in a Game 7 in the last round, but I think the Mavericks veteran experience and deep bench will beat the Thunder this round.