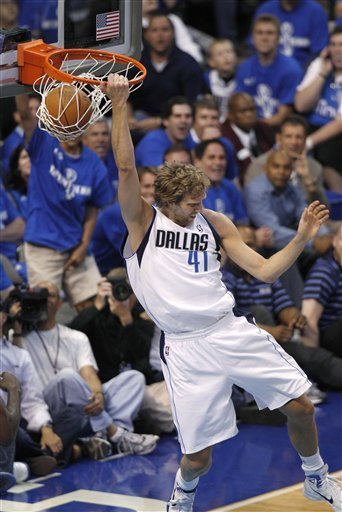 Wow. Dirk shoulda saved this one for the 2012 Dunk Contest!

Jump for some playoff action baby!

Newsflash: Dirk Nowitzki can shoot. Nearly 50 points on only 15 shots? 24 free throws in a row? INSANE. When Nellie hyped up Dirk back in 1998 he sure knew what he was talking about.

I'm impressed the Thunder made it to the Western Conference Finals with such a young and up-and-coming team, but I think this is the beginning of the end of their nice run this season. They've got an extremely bright future, but it takes time.

Peninsula is Mightier vs BlogaBull

I don't know about you, but I was pretty shocked that the Bulls won Game 1 so easily. That Taj Gibson throwdown on Dwyane Wade was unreal. I still see a rematch of the 2006 NBA Finals in the script though. The Heat will come back with some fire- they'll bring the heat if you will.