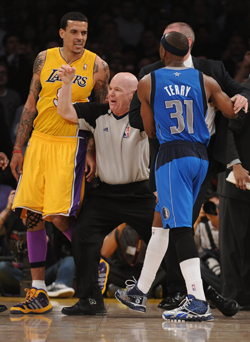 Matt Barnes is the chili sauce you add to your beef noodle soup to make it spicy hot.

Jason Terry, ejected. Steve Blake, ejected. Matt Barnes, ejected. Brendon Haywood, ejected. Shannon Brown, ejected. Three fans in the crowd, ejected. This was the total aftermath of the altercation back in March 31st that started with Jason Terry shoving Steve Blake to the ground in a blowout. (If you want to see what how it went down, make the jump for the Youtube video.)

The next day, Matt Barnes got a 1 game suspension for "escalating an on-court altercation and actions following his ejection". But the suspension didn't stop Matt Barnes from hitting it up on twitter:

Matt_Barnes22: I get an extra day of rest for my knee. Ill be watching the game 2nite w/the rest of the laker fans, on tv. All good team will keep it Rolln 2nite vs the Jazz.. Ill be bak sunday.. Appreciate the support from all the lakeshow fans.. RESPECT!!

Matt_Barnes22: Also another thing NO ONES worried bout wat Jason Terry is talkn bout everyone remembers the 07 season Me & the Golden St homies laid out the blueprint on how to beat Dallas.. "PUNK'EM" Aint **** changed homey.. So enough w/the small talk

Though Matt Barnes claimed in Sunday's interviews that he won't carry anything over to the series when it starts tonight, you can bet your house that the Mavericks haven't forgotten about what happened. The stage is set for lots of fireworks to go off in this series.

Oh yeah, there were a couple of games yesterday, too. The Grizzlies kept up their upsetting ways by taking Game 1 from the Thunder with a 2nd qtr run that pushed them up by 17, and held off the Thunder the rest of the way.

The Heat showed that they can play just as intensely as the Celtics do, and like the Grizzlies, they pulled away in the 2nd qtr and held off the Celtics the rest of the way. Paul Pierce got hit with 2 Ts in 59 seconds, resulting in an auto-eject. Looking at the replays, Pierce didn't appear to do anything to warrant the 2nd T, but referee Dan Crawford said after the game that Pierce made a profane "verbal taunt" at Dwyane Wade. Add to this comments from the Doc Rivers who thought there were flagrants that should have been called, and you have yourself more fireworks to watch for in this series. 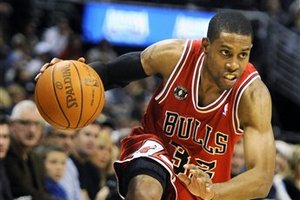 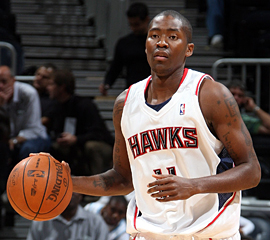 Former Warriors CJ Watson and Jamal Crawford will battle each other off the bench.

The Bulls had trouble dealing with the speediness and aggressiveness of the Pacers. The Hawks are "speedy" and aggressive", but they are also sloppy and sometimes unfocused. I think that will be the Hawks undoing. I'll go with the Bulls in this series.

Injuries: Hawks Kirk Hinrich is likely out for the entire series with a severely strained right hamstring. Carlos Boozer is working through a turf toe, but is expected to play.


This series started all the way back on March 31.

I'd rather see the Lakers lose and get knocked out of the playoffs, but I'm calling the Lakers on this one. No matter what the Mavericks say, if it comes down to a battle of mental toughness, they're going to lose. We saw an example of that in the last series in Game 4 when they gave up a 23pt lead and the game to the Blazers.