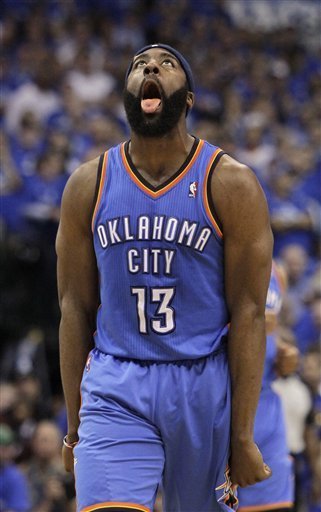 In the 4th qtr of Game 2, Scott Brooks had a big decision to make. Should be bring back Russell Westbrook, Serge Ibaka, and Kendrick Perkins back into the game? Or should he leave his bench of James Harden, Nick Collison, Eric Maynor, and Daequan Cook out to close the game? Scott Brooks felt the bench was playing so well, he took a chance and left them in. And he won. The Thunder bench went on an 11-2 run to push a 1 pt lead to 10, and held off the Mavericks to even that series and put the pressure on the Mavericks to win at least one in OKC.

And that brings us to tonight in OKC, where the Mavericks look to take the series lead back, or else prepare for the ridicule of being "soft" or "pretenders". 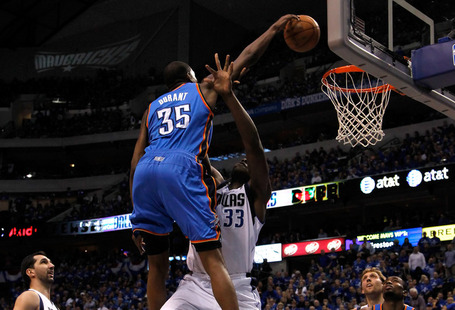 Brendan Haywood was upset about this play, but not because he was posterized.

He was upset that Peja Stojakovic didn't move his feet enough to keep Kevin Durant away from the drive. "I'm like, 'Peja, uh, can you close the gate a little bit maybe?'", said Haywood. And Haywood was upset about Peja guarding Durant at all. "There's no way in the world we should have had Peja on Durant. That's wrong. We're going to blame that on a coaching error. If Peja is on Durant, we should automatically as a team yell zone. It should definitely be a zone." Let's see what kind of adjustments the Mavericks make in tonight's game.