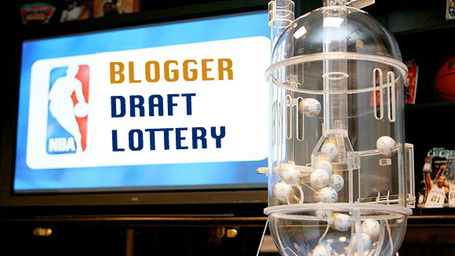 GSoM's blogger draft record is the opposite of the Warriors- "Unbustable Baby!"

Sure the Cleveland Cavaliers scored 2 top 5 picks in the 2011 NBA Draft Lottery, but guess what GSoM scored in the 2011 NBA Blogger Lottery? I don't think I even need to tell you to... JUMP!

For those of you who aren't NBA blog junkies and veterans such as myself, the blogger super lotto is an event that happens semi-regularly. It's a time where there's hope for the future thanks to bloggers with RIDICULOUS UPSIDE. Longtime readers might remember how we struck gold back in 2009.

As I noted above we managed to win not 1, but 2 lottery prizes in this year's Blogger Lottery. Like the Cleveland LeBrons Cavs we walked away with the 1st and 4th picks (they seem pretty happy over at Fear the Sword). That first pick I'll remind you was part of a deal I swung with Steve Perrin over at Clips Nation back when Baron Davis (the artist formerly known as Boom Dizzle) left the Bay for LA in the summer of 2008.

Well the 2011 NBA Blogger Draft happened this morning and I must tell you, GSoM came up BIG. Unfortunately it wasn't televised, but I'll try my best to recap the event for you...

The first pick was a no-brainer.

With the 1st pick in the 2011 NBA Draft Golden State of Mind selects...

from The City blog!

ESPN's John Hollinger: "Evanz was a the obvious pick at #1. There's a reason the GSoM braintrust can't be stopped. To be perfectly honest, ezPM > PER any day of the week!"

With that first pick alone I knew we were already big draft day winners, but in today's NBA one superstar alone can't bring you a championship. Luckily we had one more pick to net another superstar talent.

With the 4th pick in the 2011 NBA Draft Golden State of Mind selects...

ESPN's Chad Ford: "GSoM simply could not have pulled this move off without Jerry West. It helps to be blogging for The Logo. I LOVE this pick."

With our new draft picks I guarantee you that GSoM will be unstoppable baby for many more years to come.

Please give a golden welcome to the two newest members of our your favorite blogging crew!