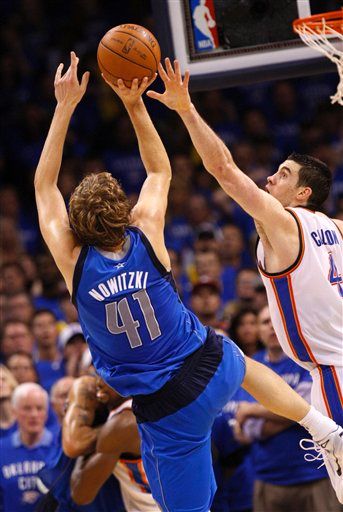 Did you know that Dirk Nowitzki's middle name is "Off Balance Shot"?

This time, it wasn't about the Thunder's poor START, but rather, the Thunder's poor FINISH. The Thunder's START was terrific. They started the game aggressive, hitting their first 9 shots/layups/dunks while they defensively hugging their man and caused several turnovers, including 2 inbounds steals out of 2 Mavericks timeouts. By the end of the 1st qtr, the Thunder had gone up by as much as 12 and the Mavericks had burned 3 timeouts.

The Mavericks are an experienced bunch, and they settled themselves and slowly fought back. Each time they gave away a free basket, they came right back and made up for it. Still, every time the Mavericks came close to going over the hump and taking the lead, the Thunder had their own answer and knocked the Mavericks back to an 8 or 9 pt deficit. Halfway through the 4th qtr, one of those Thunder knockdowns was capped by a Durant 3 that pushed the Mavericks deficit to 15, and the game should have been over.

Yes, "should have been". But wasn't. Three things happened after that Durant 3. First, James Harden fouled out, which meant the Thunder lost one of their late game offensive options. Second, the Thunder players started to freeze up and take bad or nervous, "uptight" shots. Third, Dirk Nowitzki happened. With a 10 pt deficit, he hit a 3 to close to within 7. Then from the baseline, he tried to draw a foul, didn't get the whistle, tossed it up, and hit it anyway, deficit down 5. Finally, with Collison hanging all over him, Dirk takes a fall away shot and drills it, deficit down 3. Add in a Marion FT and 2 Dirk FTs after that, and the Mavericks FINALLY tie the game to force overtime. The Thunder's FINISH, or lack thereof, cost them the game and in all likelihood, the series.

The Thunder are an inexperienced team, and it showed in the final minutes both in Game 3 and Game 4. In Game 3, we saw the Thunder players go for the "hero" shot instead of the good shot to try to complete the comeback. In last night's game, we saw them freeze up and take bad, nervous shots. They are basically done in this series. Even if they somehow force a Game 7, I don't think they'll can handle the pressure of closing out a series.

Tonight, it's back to Miami we go. 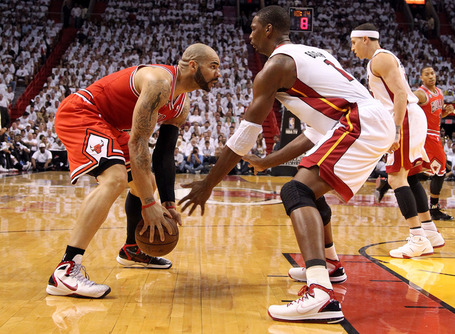 These two had a good game in the last game. Who's next to step up?

The broadcasters in Game 3 made a very interesting comment. They said that the Heat have a few 2-way players than can play offense AND defense, while the Bulls have to choose between offense OR defense players. This gives the Heat an edge in the matchups.